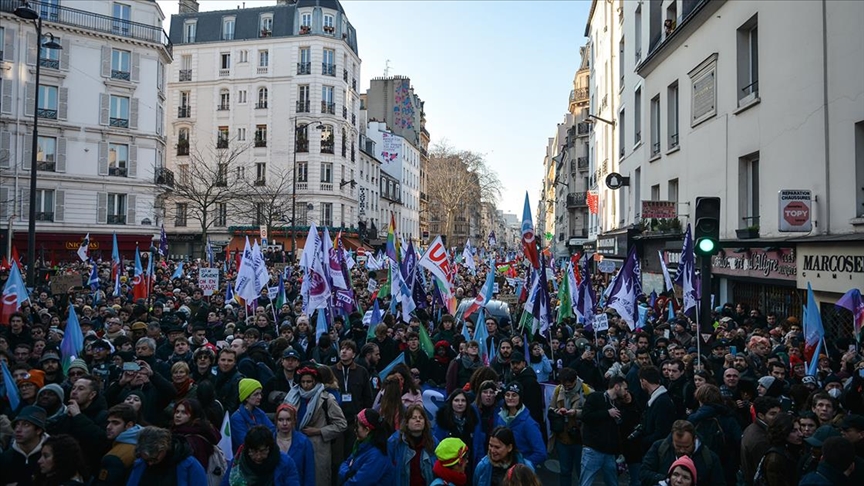 Members of a youth organization in Paris, the French capital, demonstrated against the government’s pension reform.

A demonstration was held in Paris at the call of about 10 youth organizations.

Demonstrators with banners “No pension at 64”, “Metro, work, coffin”, “Work after 60 murders”, “(French President Emmanuel) We are here for the dignity of the workers and a better world, even if Macron does not want it” , “Together we are here to make the world a better place.” Strike!” chanted slogans. There were also yellow vests among the demonstrators.

While the ATMs and bank glass targeted by masked demonstrators were damaged, garbage cans were set on fire. While there were tense moments, especially at the end of the show, glass bottles were thrown at the security forces.

According to the organizers, 150,000 people took part in the action. Speaking to AA, 18-year-old high school student Olivia Dufour said they are protesting the pension reform and that people close to retirement will wait longer with the reform.

“There is time for 10 more reforms before I retire,” Dufour said. He mentioned the negative impact of the reform on unemployment. According to the French press, based on judicial sources, 12 thousand people took part in the demonstration, 6 people were detained.

Prime Minister Elisabeth Bourne unveiled the content of the pension reform that was among President Emmanuel Macron’s campaign promises on January 10.

Noting that in a country where the retirement age is 62 years, the statutory retirement age will gradually increase by 3 months each year and will be increased to 64 years in 2030. On January 19, more than 1 million French people took to the streets against the reform.

According to official figures, 1.12 million people took part in the demonstrations, which took place on January 19 at the call of many trade unions in the country, and according to the organizers, more than 2 million people.

While various parties on the left supported the demonstrations on 19 January, 8 of the country’s most important trade unions called on the French to take to the streets again on 31 January.

News “In China, 80 percent of the population is infected.” Last ...