“Why is CIIE preferred for the first launch of science-based products?” – WORLD 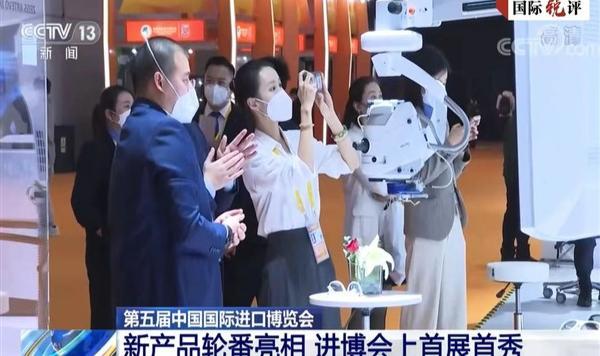 “Why is CIIE preferred for the first launch of science-based products?”At the 5th China International Import Expo (CIIE), many domestic and foreign scientific inventions, products and technologies were introduced to visitors for the first time.At the 5th China International Import Expo (CIIE), many domestic and foreign scientific inventions, products and technologies were introduced to visitors for the first time. With these inventions inspiring people to innovate, CIIE has created a platform for domestic and foreign companies to jointly benefit from innovation opportunities. In fact, one of the most important factors in the continuous growth of CIIE’s global influence over the past 5 years is innovation. . According to statistics, the number of new products, technologies and services introduced to the world during the first four semesters of CIIE has exceeded 1500. For the first time, more than 170 new products were greeted by visitors at the 5th CIIE. This number has increased by 50 percent. Another reason why CIIE is followed with great interest in all countries of the world is that China has a huge market. With a population of 1.4 billion, China has over 400 million middle-income people. Over the past 5 years, many multinational companies first joined CIIE to promote their new technologies, and then began to directly invest in China. These companies have taken advantage of China’s huge market opportunities through CIIE. For example, the Roche Pharmaceutical Company of Switzerland presented for the first time at the 3rd CIIE a new drug called evrysdi, which can treat muscle disease in spinal muscular atrophy (SMA), which was approved for use in China in the shortest possible time. like a year, and from an exhibition product, it has become a real product on the market. turned into a product used in a sense. During this period, at CIIE, the Chinese side announced that it will accelerate the benefit of all countries in the world from market opportunities in China and bring more benefits to countries. In fact, CIIE regulation is essentially an innovation. China has climbed from 34th place in 2012 to 11th in the global innovation rankings, according to data recently released by the World Intellectual Property Organization. The 20th National Congress of the Communist Party of China emphasized that innovation will maintain its key position in the construction of modernization in China. The director of the American company Honeywell noted that they will intensify cooperation with partners from China in the field of innovation in the field of sustainable development. CIIE is a high-level window into China’s openness. China’s openness index rose from 0.7107 in 2012 to 0.7507 in 2020, according to the World Opening 2022 report released on November 5. China’s rating on this issue has risen from 47 to 39. China has become an important engine of economic globalization. The Chinese side announced that they will deepen the opening at the 5th CIIE. This has had a wide resonance among foreign businesses. On the other hand, over the past 5 years, CIIE has become a platform that accelerates global business cooperation. HSBC Bank recently published the results of a survey titled “Foreign companies assess 2022 in China: tell us about the new opportunities of the Regional Comprehensive Economic Partnership Agreement – RCEP.” 2009 The growth of business volumes in Russia is predicted. In addition, 93 percent of the RCEP countries surveyed plan to expand trade with China. Former French Prime Minister Jean-Pierre Raffarin told the press: “CIIE offers many opportunities for projects to other countries and has become a platform that can bring double returns.” Each product introduced at CIIE represents a new business opportunity, new manufacturing dynamics and a new way of life. At CIIE, people will strive for a better future as well as opportunities for collaboration.

Are Americans deliberately moving on the side of people who share their ...