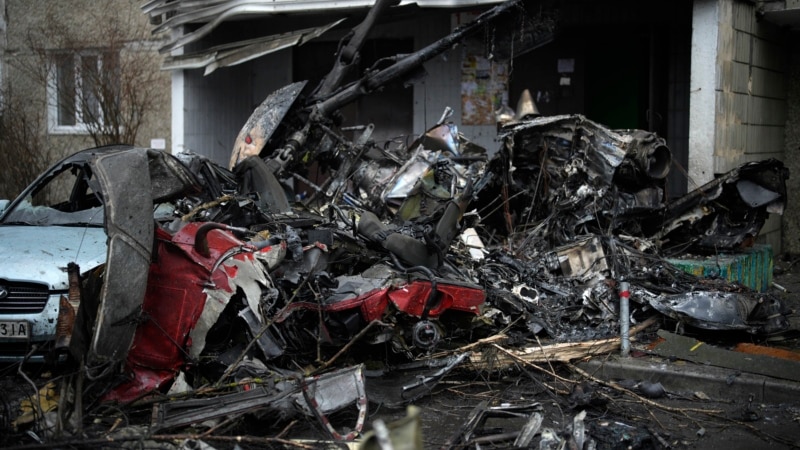 The Minister of Internal Affairs of Ukraine and a number of high-ranking Ukrainian officials were killed in a helicopter crash near Kyiv. All three children in the building hit by the helicopter died in the crash. Ukrainian President Volodymyr Zelensky called the accident a “terrible disaster.”

The helicopter crashed into the kindergarten building, causing a massive fire and complete burnout of one facade of the building. The governor of the Kyiv region said that at the time of the accident, which occurred this morning, there were children and staff in the kindergarten.

Gleb, a 17-year-old Ukrainian living in the area, told Reuters about the crash site: “We saw the wounded, the children. There was a lot of fog, everything was scattered around. ran to them. We hugged the children and took them out of the kindergarten, where the fire started.”

The governor of the Kyiv region Oleksiy Kuleba said that 18 people died, but later in the statement of the head of state the number of dead was 16. It was reported that 30 people, 12 of whom were children, were injured, most of the victims had burns.

In a message shared via messaging app Telegram, Zelenskiy said: “Today, a terrible disaster occurred in Brovary, Kyiv region. This pain cannot be described in words.

Officials said it was too early to determine the cause of the helicopter crash, but no one mentioned a possible Russian attack.

The State Security Service of Ukraine (SBU) said it was investigating the crash and considering several possible causes of the crash, such as a violation of flight rules, a technical problem, or the intentional destruction of the helicopter.

“It was a shining light”

A statement from the chief of police and emergency services confirmed that the nine dead were inside the helicopter.

The helicopter crash, which came just days after the death of 45 people when a Russian missile hit a residential building in Dnipro, dealt a new blow to Ukraine.

“Unfortunately, as the pilots say, the sky does not forgive mistakes, but it is too early to talk about the causes of the accident,” Ignat said on the air of the TV show.

Lawyer and politician, 42-year-old Interior Minister of Ukraine Denis Monastyrsky entered the parliament in the 2019 parliamentary elections from Zelensky’s party. Monastirsky, who served as chairman of the parliamentary committee on law enforcement affairs, was appointed to this position in July 2021 after the departure of the then interior minister Arsen Avakov.

European Commission President Ursula von der Leyen and other foreign leaders expressed their condolences to Ukraine over the death of Monastirsky.

German Chancellor Olaf Scholz said the helicopter crash that killed Ukraine’s interior minister was an indication of the “enormous price” Ukraine paid in the war against Russia.

On the other hand, clashes were reported to have continued throughout the night in eastern Ukraine. Over the past two months, both Russia and Ukraine have suffered huge losses to gain nothing in the ongoing trench warfare.

The Ukrainian army noted that Ukrainian forces repelled Russian attacks in Bakhmut in the east and in the village of Klishchevka in the south of Bakhmut. Russia, which has focused on Bakhmut in recent weeks, said last week it had seized the salt-mining town of Soledar in the city’s north.

Progress on the front lines in the past two months seems to be getting more difficult after Ukraine made significant gains in the second half of 2022. Kyiv hopes that new weapons supplied by Western countries will give Ukraine a boost this year, especially heavy tanks that will provide mobility and protection to Ukrainian soldiers trying to break through Russian positions.

Ukraine’s Western allies will meet on Friday at the US Ramstein Air Base in Germany to pledge more arms assistance to Ukraine. In particular, attention was drawn to Germany, which has the right to veto any decision regarding the supply of Leopard tanks to Ukraine. The German-made Leopards, which are in service with the armies of many European countries, are considered the most suitable tank for Ukraine.

It is reported that the number one item on the agenda of the new German Defense Minister Boris Pistorius is the issue of supplying Leopard tanks to Ukraine.

Lithuanian Foreign Minister Gabrielius Landsbergis, who attended the ongoing World Economic Forum in Davos, Switzerland, said he was waiting for a decision on the supply of tanks to Ukraine. “From what I have heard in conversations with other leaders here, there will be a solution in this direction, there is momentum,” Landsbergis said.

Lavrov: “Peace talks are not expected”

Russian Foreign Minister Sergei Lavrov said in a statement today that Moscow does not see the possibility of peace talks with Ukraine and that there can be no talks with Zelensky. Russia noted that negotiations could only be held on the condition that Ukraine agrees with Moscow to take land within Ukraine’s borders, while Kyiv said it would continue the fight until Russia withdraws from all occupied territories in Ukraine.

In other news, Ukrainian authorities yesterday halted search and rescue efforts in Dnipro, where Russian rocket fire hit an apartment building on Saturday and killed 45 people. It is reported that about 20 people disappeared under the rubble.

Soldier news from Russia to the Azerbaijani-Armenian border. News headlines and ...