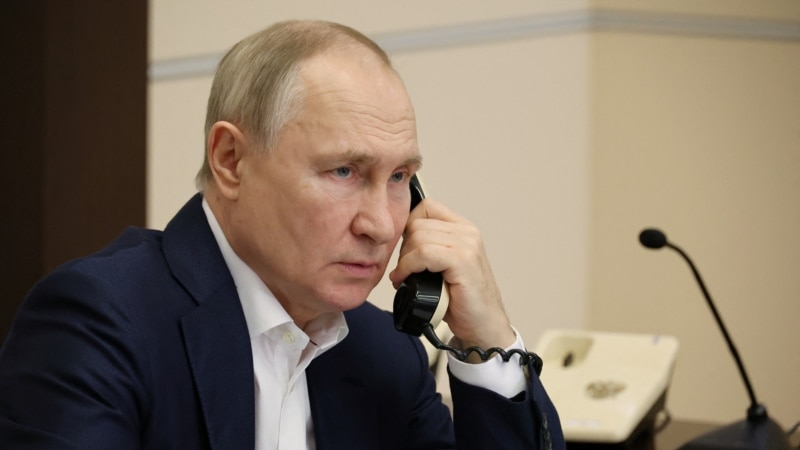 Russian President Vladimir Putin instructed the Russian Defense Ministry to conclude a ceasefire on the territory of Ukraine on Christmas Eve and Orthodox Christmas. Ukraine, on the other hand, rejected Putin’s offer and said there would be no ceasefire until Russia withdraws its troops from the occupied territories.

The head of the Russian Orthodox Church, Patriarch Kirill of Moscow, called on both sides of the war in Ukraine for a ceasefire on Christmas Day on Thursday.

According to the Kremlin statement, Putin said: “Given the call of His Eminence Patriarch Kirill, I instruct the Minister of Defense of the Russian Federation to introduce a ceasefire regime along the entire line of contact in Ukraine from 12:00 00:00 on January 6, 2023 to 24:00 on January 7, 2023 “, the message says.

“Given the fact that a large number of citizens of the Orthodox faith live in the conflict zones, we call on the Ukrainian side to declare a ceasefire and allow them to attend services both on Christmas and on Christmas Eve,” Putin said.

However, Ukrainian presidential adviser Mykhailo Podoliak shared a tweet saying that Russia “must leave the occupied territories, only then there will be a ‘temporary ceasefire'” and said: “Keep the hypocrisy to yourself.”

Podolyak said that, unlike Russia, Ukraine did not attack foreign lands and did not kill civilians, but simply destroyed “members of the occupying army on its territory.”

Earlier, Kyiv rejected Kirill’s proposal for a ceasefire as “a cynical trap and an element of propaganda.”

Presidential adviser Podolyak described the occupation-supporting Russian Orthodox Church as a “military propagandist” facilitating the “massacres” of Ukrainians and the militarization of Russia.

Previously, Ukraine viewed the possibility of calling Russia for a ceasefire as an attempt by Moscow to give its troops a breather.

It was planned that the ceasefire would last a total of 36 hours. The Russian Orthodox Church celebrates Christmas on January 7th.

On the other hand, Ukraine’s main Orthodox Church has rejected the authority of the Moscow Patriarch, and many Ukrainians have changed their calendar to celebrate Christmas on December 25, as in the West.

US President Joe Biden told reporters at the White House that Vladimir Putin was “trying to catch his breath a little” by offering a 36-hour ceasefire.

On the one hand, Kyiv is trying to push back the invading Russian soldiers to the east of the country. Ukrainian President Volodymyr Zelensky asked the West to send heavy tanks.

The Ukrainian army said that Russian troops were preparing for an offensive in the Bakhmutsky district of Donetsk, but to no avail in the Avdeevsky and Kupyansky districts.

The governor of neighboring Lugansk said Ukrainian forces are reclaiming lost territory step by step, but not quickly.

Lugansk and Donetsk, which are part of the Donbass, are the industrial centers of Ukraine. Parts of this region were occupied by Russian puppets in the region in 2014.

Russia declared Donetsk, Luhansk, Kherson and Zaporizhzhia its territory in September after a referendum. Ukraine and Western countries have condemned these referendums. Russia does not have full control over any of these four regions.

The announcement of victory in the devastated Bakhmut after months of artillery fire is important for the Russian leadership as a success that will be shown to the public after the recent setback in the war.

Bakhmut, located on the supply line between Donetsk and Lugansk, is an important step towards the capture of two large cities, Kramatorsk and Slovyansk. The population of Bakhmut, which had 70-80 thousand people before the war, after the war was reduced to 10 thousand.

The fighting in the area, which the commanders of both sides described as a “meat grinder”, was of an exceptionally fierce nature.

The Ukrainian army reported that 800 Russian servicemen were killed in battles in Donetsk the day before. Although this indicates a mass loss of life in one day, the Reuters news agency was unable to verify this independently.

The governor of the Lugansk region, Sergei Gaidai, noted that he expects an escalation of clashes on the eastern front. On the other hand, there are frosts as the air temperature in the region gradually decreases.

Russia increases the number of soldiers in Bakhmut

The Ukrainian leader also said that his soldiers in Bakhmut had inflicted heavy losses on the Russian army, and that Russia had begun to increase the number of its soldiers in the region.

The Ukrainian military said Russian missile attacks on Bakhmut resulted in the deaths of several civilians in two other cities in Donetsk, Konstantinovka and Kurakhovo.

When asked about a possible counter-offensive by Ukraine on national television, Lugansk Governor Gaidai noted that the cities of Rubizhne and Severodonetsk had been destroyed by the Russian occupation forces and could not be used as centers.

Recalling the line of defense in the region, which Russia has strengthened since 2014, Gaidai said: “The positions of the invaders have strengthened here. Therefore, it will not be easy to save the Luhansk region.”

Hayday said that Russia has begun sending additional soldiers to the region, including those recruited as part of the mobilization.

Evgeniy Balitsky, the Russian governor of the Russian-occupied Zaporozhye region, said five people were killed and 15 injured as a result of Ukrainian artillery fire.

Zelensky reiterated his demand for tanks

In a video released last night, Zelenskiy urged his Western allies to send tanks and heavy weapons to the Ukrainian army to fight Russia.

Zelenskiy thanked Macron but said: “There is no logical explanation why the West has not yet sent tanks to Ukraine.”

A new step in the supply of weapons from Germany

It is reported that Germany plans to make a “qualitative step” in the supply of weapons to Ukraine.

According to the newspaper Sueddeutsche Zeitung, citing government sources, the German move may include the supply of Marder combat vehicles. The decision is said to have been made in close cooperation with the United States and France. According to the report, Germany will take its military support to Ukraine to a new level.

After the Russian invasion last February, Scholz increased defense spending and sent aid and weapons to Ukraine. But like other Western powers, he sometimes hesitated before sending powerful weapons out of fear of a direct confrontation with Moscow.

The German chancellor also made it clear that he does not want to go it alone in sending heavy weapons to Ukraine and will coordinate deliveries with other NATO members.

Economics Minister Robert Habek, who visited Oslo, said the French decision and a possible similar move by the United States would encourage Germany to speed up its own discussions.

“We have always adjusted arms supplies from Germany so that Ukraine can get the support it needs at the moment. This means that it is a dynamic process. Therefore, the federal government will now quickly discuss this situation and then make appropriate decisions,” Habek said.

As the war progresses, the Kyiv administration demands more and more German-made Abrams and Leopard tanks every day.

President Joe Biden said yesterday that the US plans to send lighter combat vehicles called Bradley Fighting Vehicles to Ukraine. Used since the mid-1980s to transport US troops, the Bradley is a powerful weapon.

In addition to the 21 billion 300 million aid package announced for Ukraine, the United States is preparing to announce a new arms package in the coming days.

The US is also ramping up the weapons it sends to Ukraine.

Russia invaded Ukraine on February 24, citing security concerns and protection of the Russian-speaking population. Ukraine and its allies accuse Russia of unleashing a causeless war.

Putin ordered a truce in connection with the Orthodox Christmas. Ukraine ...