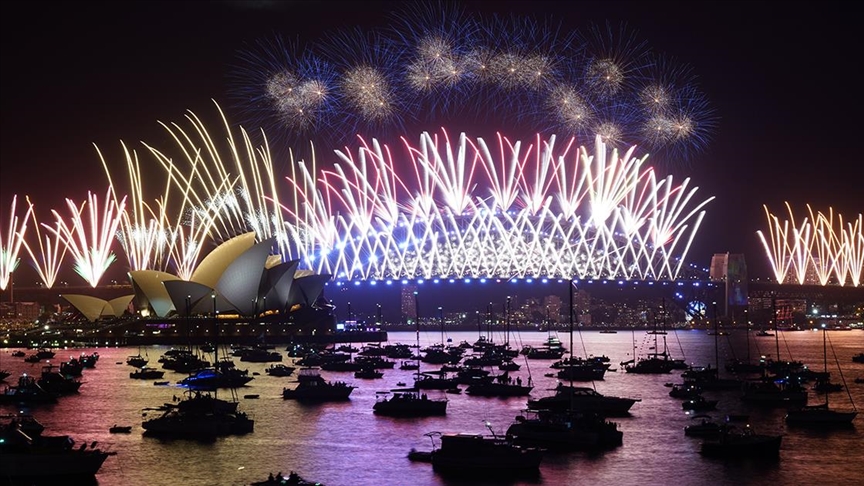 The New Year in the world was enthusiastically welcomed with colorful fireworks and celebrations.

In the world New Year It was first celebrated on the island of Kiritimati (Christmas Island) in Kiribati. Kiritimati greeted 2023 at 13:00 Turkish time.

Luxurious fireworks took place in many cities across Australia, greeting 2023 at 4pm.

Meanwhile, American Samoa in the South Pacific, about 164 kilometers from Samoa, will be the last to say hello to 2023. The New Year was celebrated with colorful fireworks in the capital Astana.

Residents of Astana watched fireworks over the frozen Yesil River.

The President of Kazakhstan, Kassym Chomert Tokayev, broadcast a video greeting on national TV channels when it was 00.00 in the country.

In the capital Bishkek, residents of the city, foreign students and tourists filled the Ala-Too square.

A few minutes before the new year, the New Year’s message of the President of Kyrgyzstan Sadir Kaparov was broadcast on the screen.

Thousands of people celebrated the New Year in Berlin, the capital of Germany.

Celebrations in Berlin were held in front of the Brandenburg Gate.

During the celebrations, a light show was arranged instead of the official fireworks.

However, many fireworks were set off around the Brandenburg Gate.

The streets and streets around the areas where the events will take place have also been closed to traffic.

It became known that in the area where the New Year celebrations were held, 1,100 police officers were on duty.

New Year’s excitement was experienced in the capital Baku, where on the eve of the streets and squares were decorated with multi-colored lights.

Thousands of Azerbaijanis gathered in the National Park on the shore of the Caspian Sea celebrated the New Year with fireworks.

Thanks to the performance, which began when the clock showed 00.00, the Azerbaijanis experienced the excitement of entering the new year together.

Celebration of the New Year in the Balkan countries

Thousands of people greeted 2023 with fireworks, and famous bands of the country gave a concert on a stage set up around the monument to the unquenchable fire in the center of Sarajevo, the capital of Bosnia and Herzegovina.

Citizens who filled the Ban Jelačić Square in Zagreb, Croatia’s capital, cheered to the songs, and fireworks set off in the first minutes of the new year created a visual feast in the city.

Belgrade people gathered in front of the parliament building in Belgrade, the capital of Serbia, and welcomed the new year with concerts by Serbian singers.

Until the central celebration was organized in Podgorica, the capital of Montenegro, famous artists of the region took to the stage in the cities of Budva and Kotor, located on the coast of the country.

Residents of the capital of North Macedonia, Skopje, celebrated the New Year at Macedonia Square in the capital. In this context, various local artists entered the stage, especially the well-known Macedonian singer Elena Risteska.

As part of the celebration, which was attended by hundreds of citizens, the traditional fireworks of the municipality of Skopje were not held, and the citizens blew up the fireworks individually.

Tirana, the capital of Albania, has traditionally welcomed 2023 with concerts and fireworks. Many Albanian artists and musical groups took to the stage of the celebrations organized at Skanderbeg Square in the capital.

In Pristina, the capital of Kosovo, the New Year was celebrated with concerts. Hundreds of citizens took part in the celebrations organized by the municipality of Pristina and many singers such as Kida, Lumi B. and Jericho gave concerts in this context.

The municipality of Pristina also banned the use of pyrotechnic materials, and citizens set off fireworks themselves.

In the news of 2022, global press freedom comes under heavy pressure. ...