The Paris murders are featured in the news for their 10th anniversary. News headlines and events from Last Minute France 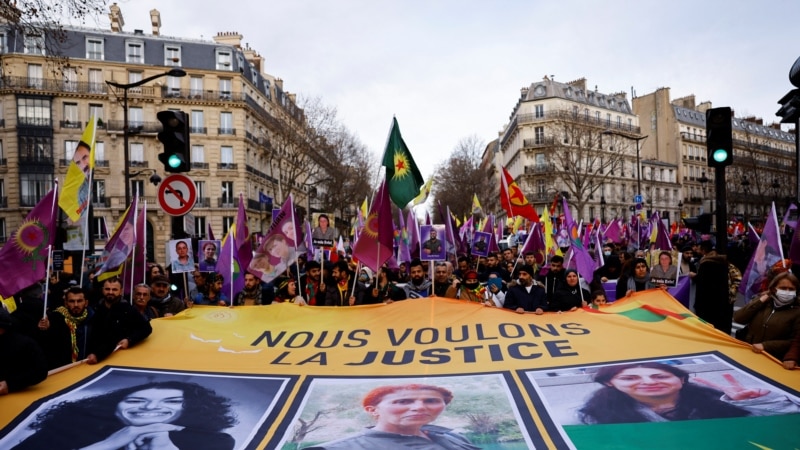 Three Kurdish women from the PKK, Sakine Kansiz, Leyla Shailemez and Fidan Doğan, who were killed in an attack on January 9, 2013 in Paris, the capital of France, commemorated the memory with a procession held on the 10th anniversary of their death.

The march also protested the killing of Evin Goya, Mir Perver and Abdurrahman Kizil, who were killed in an armed attack by a 69-year-old Frenchman at the Ahmet Kaya Kurdish Cultural Center on 23 December.

Attendance at the annual march in Paris has been higher since 2013 due to a second terrorist attack a few weeks ago. The demonstrators, who arrived at the North Station on buses from many European countries, marched from the North Station under a banner with portraits of six people killed in two attacks.

During the march, they carried banners of PKK leader Abdullah Öcalan and PKK flags, as well as portraits of 3 Kurdish women who died 10 years ago. The march was also attended by deputies and mayors from the French radical left movement La France Insoumise (LFI), the Communist Party of France (PCF) and the Green Party.

The speeches claimed that the “Turkish state” was behind both murders and demanded that the “state secret” label placed by the French government on the 2013 murder investigation be removed.

The speakers, also critical of the French government, demanded clarification of the circumstances of the murder, saying: “If the 2013 murder had been solved, there would not have been a second attack in 10 years.”

Ten years ago, on January 9, 2013, PKK founder Sakine Cansiz (54) and PKK members Fidan Dogan (28) and Leyla Saylemez (24) were shot dead in the head of the Kurdistan Information Center in Paris. Ömer Güney, who was found to be at the scene due to the security cameras in the building and traces of gunpowder in his purse, was arrested as the only suspect in the murder immediately after the incident.

However, at the end of 2016, the investigation was closed when Omer Güney died in the hospital where he was admitted in December 2016, a few weeks before the start of the hearing, due to a brain tumor. However, the French judiciary accepted the statement of the families and relatives of the victims and in 2019 reopened the investigation.

Ten years after this attack, on the day of the 10th anniversary rally dedicated to the memory of those killed in the 2013 attack, on December 23, a triple murder was committed at the Ahmet Kaya Cultural Center.

Evin Goyi (Emine Kara), artist Mir Perver (Mehmet Shirin Aydin) and Abdurrahman Kyzyl, important figures in the PKK women’s movement, were killed in the attack. This time, as soon as the intruder attacked the Kurdish barbershop, he was neutralized by the owners and customers and handed over to the French police.

The attacker turned out to be a 69-year-old French citizen, a far-right extremist who was found to have “pathological hatred of foreigners.” The assailant, William Malet, was revealed to have been xenophobic after his home was robbed in 2016 and had previously served a year in prison for “a machete attack on a migrant camp near Paris.”

When the attacker was asked, “Why did he target the Kurdish community?”, he said, “First I went to Saint-Denis, it wasn’t crowded enough. My clothes were not suitable for changing the magazine of my pistol. I went home, changed my clothes and came here on foot. “I targeted ISIS because they didn’t kill ISIS, they fed them in the camps,” he said.

The suspect, who was briefly tested in a psychiatric hospital, was imprisoned pending trial. However, the anti-terrorist prosecutor’s office refused to take on the investigation, as there was no “evidence” that the murder was a terrorist attack.