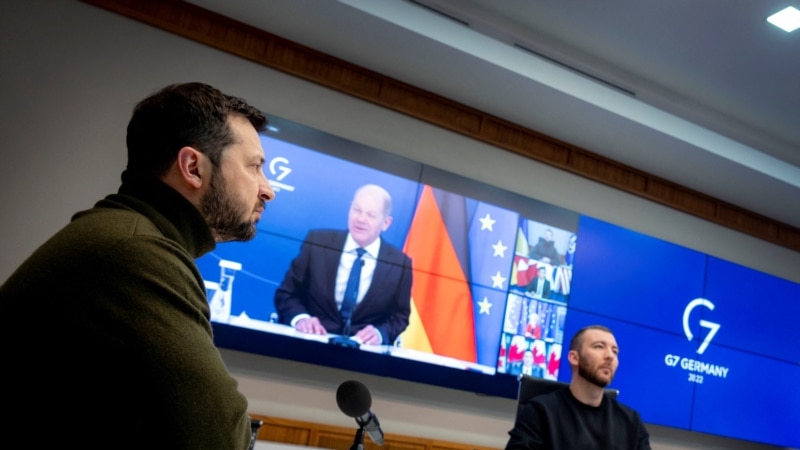 The leaders of the G7 countries, where seven of the world’s most developed economies gather, said they would work together to strengthen Ukraine’s military potential and urgently focus on air defense systems.

The leaders, who held a virtual meeting chaired by German Chancellor Olaf Scholz, said Russia’s “irresponsible nuclear rhetoric” was unacceptable and that any use of chemical, biological or nuclear weapons would have serious consequences.

“We will continue to coordinate efforts to meet Ukraine’s urgent needs for military and defense equipment, with a particular focus on providing Ukraine with air defense systems and capabilities,” the joint statement said.

A spokesman for the German government, which chairs the G7, said before the meeting that specific arms deliveries to Ukraine were not on the agenda.

Call from Zelensky to Russia

Addressing the leaders at the meeting, President of Ukraine Volodymyr Zelensky asked the G7 countries to help Ukraine get another two billion cubic meters of gas and supply modern tanks, artillery and shells, as well as long-range weapons.

Speaking at the G7 videoconference, Zelensky also urged Russia to take a “principled” step towards a diplomatic settlement of the war in Ukraine and suggested that Moscow withdraw its troops by Christmas.

“If Russia withdraws its troops from Ukraine, this will also provide a reliable cessation of hostilities. I see no reason why Russia should not do it now, by Christmas,” Zelensky said.

On the other hand, German Chancellor Olaf Scholz said in a statement after the video conference that the G7 has created an open international climate club for countries that want to cooperate in the fight against global warming.

Prime Minister Scholz said the new forum group was “conceived not as a G7 initiative, but rather as a global initiative.”

“Through the climate club and the socially just transition of our industries to climate neutrality, we are making a significant contribution to achieving global climate goals,” said Scholz.

The climate club aims to support the swift and ambitious implementation of the Paris Agreement, which aims to limit global warming to 1.5 degrees Celsius, the German government said. Today is the seventh anniversary of the adoption of the treaty.

The German government said the club will work to accelerate the transition to cleaner forms of energy in industry and to further develop measures to reduce emissions.
Emerging and developing countries that commit to join the club will also receive support to transform their industries.

Scholz told reporters in Berlin that the Organization for Economic Co-operation and Development (OECD) and the International Energy Agency would create a “climate change secretariat.”

Germany will chair the G7 in rotation until the end of the year, and then transfer this task to Japan.

News about the corruption scandal at the General Assembly of the European ...