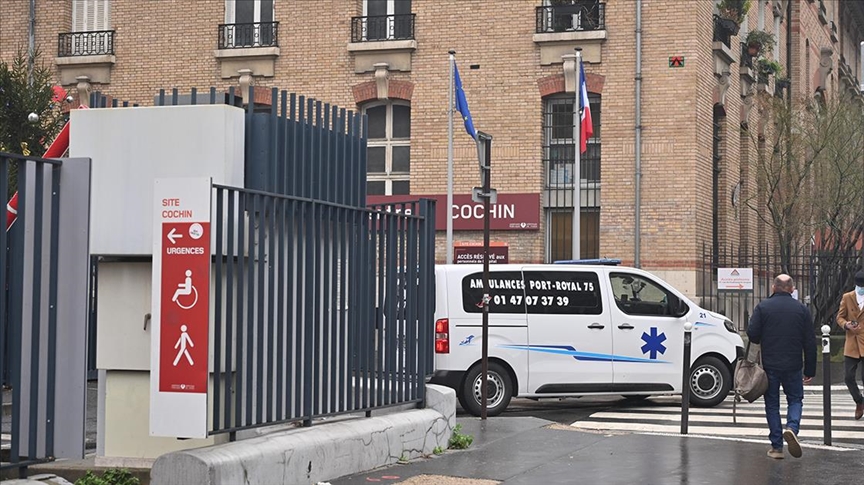 France’s health care system has entered a major crisis when shortages of staff, lack of wages, insufficient infrastructure and beds have been combined with a simultaneous outbreak of epidemic diseases such as Covid-19, influenza and bronchiolitis.

The crisis in the health care system in Franceaverage waiting time of 10 hours in emergency services, patients lying in the corridors, patients who died due to the inability to intervene in a timely manner. became obvious.

In addition to significant layoffs and long holidays of doctors and paramedics due to the Covid-19 epidemic due to busy working hours and insufficient wages, strikes by general practitioners in the country since December 2022 have also led to a painful period in France. revealed the chronic problems of the health care system.

According to information collected by AA correspondents from the French press and official sources, last month across the country in emergency services 31 people died because they failed to intervene in time.

According to the Union of Samu-Urgences de France, emergency services in hospitals were used 55 percent more intensively in December 2022 than in the same period of the previous year. Patients waited for an appointment with a specialist doctor at 19:00 on Christmas

While hospital occupancy at the end of the year is always high, the fact that 15-20 percent of the beds that were closed during the Covid-19 epidemic could not be opened this year due to a lack of staff, leading to waiting times in an average of 10 hours, especially in emergency services.

During the Christmas holidays, the waiting time for patients to see a specialist doctor increased to 19 hours. Marc Noizet, president of the Union Samu-Urgences de France, said: “Emergency services cannot be empty because patients cannot be admitted and the beds in the corridors are full due to patients waiting to be admitted.” used the phrase.

Noiset said that in December 2022, 31 people died in intensive care while awaiting intervention or transfer to the hospital, and most of them were over 60-70 years old.

The transfer time from emergency to hospital varies between 2-3 days. In December 2022 in France, where transfer time from intensive care to hospital was 2-3 days, it was noted that a 90-year-old patient who had been waiting for transfer to the hospital for more than 90 hours was changed to a bed in the hospital’s emergency room only once during this period.

While bedsores formed on the bodies of elderly people who had been on stretchers for a long time, medical staff had to choose between the sick in the distribution of food due to malnutrition.

Professor Philippe Juvin, who is also an MP for the Samu-Urgens France Union, said that the number of people who died while waiting in intensive care was more than 31, as stated in official statements, and this number has reached 150.

Yuvin noted that the official figure reflects data from 19 of the 32 regions that share voluntary data in the country, with the actual death toll even higher for the country as a whole.

Despite the crisis, France has not activated its “emergency medical plan”.

In the Île-de-France region, including the capital Paris, on December 27, 2022, the French administration refused to activate the “emergency medical plan” even in a situation as serious as the fact that only one intensive care bed was occupied. empty among all hospitals.

After that, on December 29, 2022, 9 hospitals and 1 clinic in Savoy and Ain activated the local emergency plan.

On the other hand, hospitals have started postponing non-emergency surgeries due to lack of beds and staff, and those in relatively good condition being discharged from inpatients.

The crisis was aggravated by the strikes of general practitioners who demanded an increase in examination fees from 25 euros to 50 euros.

In France, there has long been a shortage of medical personnel.

The crisis in the health care system, which has become more evident with the simultaneous emergence of epidemics of Covid-19, influenza and bronchiolitis in the country, is assessed as a reflection of the long-standing problem of the “shortage of medical personnel” in France.

France has a total of 697 emergency units responding to 22 million requests a year, according to the Research, Research, Measurement and Statistics Division (DREES).

Even ignoring the recent retirements of doctors, the data shows that there are only 220,000 doctors working in the country in 2022.

France ranks 18th in Europe in terms of the number of doctors per capita.

In a country where 6 million French people do not have access to specialist doctors, almost half of the doctors are over 60, according to figures recently released by President Emmanuel Macron, and that number will drop even further as they retire in 2025.

In addition, in a country where at the beginning of 2020 there were about 800 thousand nurses, in 2 years this number has decreased by about 160 thousand. The country lacks 60,000 nurses compared to the need for patients.

Those who cannot contact medical practitioners and specialist doctors go to the emergency department.

In France, the fact that access to a specialist doctor is from 1 to 24 months depending on the region and specialist, and general practitioners cannot be reached quickly, leads people to go to the emergency department, where they can get faster results.

According to a survey conducted in the first quarter of 2019 by the Ministry of Health, 29 percent of French people went to the emergency room in 2018.

However, 42 percent of them admitted that they went to the emergency room for other purposes, although in fact there was no need for it, and difficulties in making an appointment with a doctor made it easier to additional tests and examinations in the emergency department.

A report sent to the Ministry of Health in 2019 indicated that 9 percent of ordinary patient deaths in emergency departments and 30 percent of critically ill deaths were due to intensity.

A Senate report released in March 2022 showed that the condition of hospitals had worsened after 2 years of the Covid-19 crisis.

Despite an increase in nurses’ salaries with an agreement signed in July 2020, working conditions have increased and deteriorated.

In France, where Covid-19 still causes more than 500 deaths a week, all medical staff work at least 60 hours a week, with some employees working more than 70 hours.

On the other hand, the situation is no different for trainee doctors. 7 out of 10 trainee doctors work more than the legal maximum of 48 hours per week.

The salary of a nurse in France is about 1,500 euros, and a newly hired nurse earns about 1,600 euros. While the annual income of general practitioners is close to 60 thousand euros, the income of specialist doctors is about 90 thousand euros.

Excessive workloads can result in health workers who are physically and mentally exhausted taking sick leave or being fired.

The government has announced a budget of 19 billion euros to strengthen the healthcare system and make the profession more attractive.

However, doctors said that this budget, designed for 5 years, is not enough to solve the problems that have emerged in the health system, and expect faster intervention from the Parisian administration.

On the other hand, recent outbreaks in pharmacies where there is a shortage of drugs have also led to the depletion of paracetamol-active drugs.

While the government has restricted the sale of paracetamol and amoxicillin-based drugs over the Internet, some pharmacies have tried to temporarily produce amoxicillin as a solution.

This whole process led to the fact that the health care system in France, which was in crisis, was again discussed in the country and became the subject of discussion in the international press.

The news that the leader of the mafia, Matteo Messina Denaro, has ...