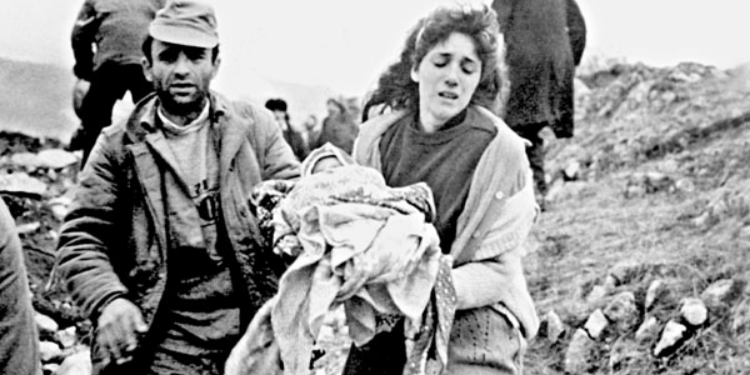 Azerbaijani Turk Sevinch takes viewers to Karabakh in 1992, when the Khojaly genocide took place, with the help of videos he posted on his social media account. The Funny Stories project, prepared by the Justice for Khojaly public organization, broke records in social networks in a short time. He will tell about the events that took place in Karabakh on the eve of the Khojaly genocide, through the eyes of 9-year-old Sevinch.

A video produced by the Justice for Khojaly platform with the idea “If a girl had an Instagram account in Khojaly in 1992” takes viewers back to those painful days with video stories by an Azerbaijani Turkish girl named Sevinch. Videos describing the difficult days in Khojaly, where the Armenians committed a bloody genocide and atrocities, will continue to be broadcast until February 25. The project was initiated with the support of the Youth Foundation of the Republic of Azerbaijan within the framework of the international information campaign “Justice for Khojaly”.

Short videos are published daily about the events that escalated on February 26, 1992 and went down in history as the bloody Khojaly genocide. With his joyful stories, he will tell the world community about the Khojaly genocide. It aims to honor the memory of the victims of the Holocaust and ensure that they are not forgotten by the younger generation.

Click here to watch the video of Sevinch from Karabakh to the days of the Khojaly genocide:

Khojaly, besieged by Armenian troops at the end of 1991, was a city with an area of ​​936 square kilometers, where 2,605 families lived and a total of 11,356 people. The next goal of the Armenians who occupied the city of Khankendi, which in December 1991 was recognized as the capital of Karabakh, was Khojaly.

The Armenians, who occupied all the villages and roads around Khojaly, cut off the road communication between the city and other provinces. Helicopter communication, which is the only connection between Khojaly and other regions, was destroyed on January 28, 1992, when the helicopter that made the Shusha-Aghdam expedition was shot down by the Armenians. This incident killed 44 civilians, mostly women and children.

The defense of Khojaly, deprived of electricity since January 1992, consisted only of lightly armed local defense forces and a small number of national army soldiers. Starting from February 25, 1992, the Armenians attacked Khojaly from three sides, using all the equipment of the 366th motorized rifle regiment of the Soviet Red Army, and for two hours held the city under artillery and tank fire.

A day after the attack, the “Khojaly genocide” took place, which will not be erased from memory for many years. According to official data, 613 Azerbaijani citizens were killed during the Khojaly genocide, including 106 women, 70 old people and 63 children. 487 people survived the brutal genocide with severe injuries. Armenian forces captured 1,275 people, 150 of whom are still unknown.

Aysel Turan
Published within the framework of the project “Khojaly genocide on its 30th anniversary – publicity in the media of Turkish countries”, implemented by the Public Association “Common Values” with the support of the State Support Fund for Non-Governmental Organizations of Turkey. The Republic of Azerbaijan.

Height Discrimination: Does Short Height Affect Our Lives and Careers?

Donald Trump will run for a second term!