Russia launches missile strikes on the Ukrainian city of Kherson, from which it is withdrawing. Last Minute GERMANY, UK, Russia headlines and events 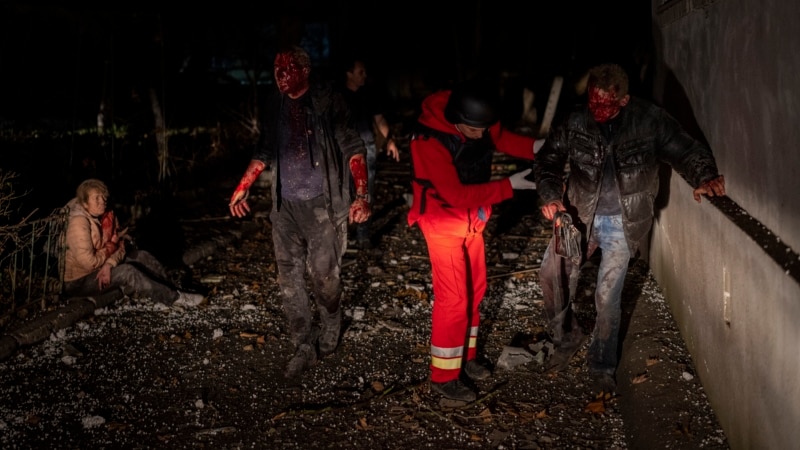 Russia has been raining rockets on Kherson for the past two days, from where it left two weeks ago. The governor of the Kherson region, Yaroslav Yanushevich, said yesterday that 10 civilians were killed and 54 were injured as a result of Russian shelling.

The governor noted that in Kherson, two micro-districts were subjected to artillery shelling, and said that because of the shelling, patients in hospitals were transferred to other districts.

The Kherson governor told Telegram that some of the children were sent to the southern city of Nikolaev, and some of the psychiatric patients were transferred to Odessa on the Black Sea coast.

The governor urged all citizens wishing to be transferred to safe areas to contact the authorities. The population of the city of Kherson, which used to be close to 300 thousand, was reduced to 80 thousand people.

Soldiers in the area have warned that Kherson could be subject to heavy air strikes as Russian forces advance across the Dnieper River.

Commercial buildings were destroyed, some burned down, and streets littered with ash heaps and broken glass as a result of shelling of residential areas, in which dozens of people were injured. The attack also affected settlements that had not previously been targets of war. A woman was reportedly killed in a rocket attack on the city on Friday.

Ukraine is trying to revive its energy system

Ukrainians were warned to stock up on water, food and warm clothing in case of further attacks.

Moscow says that attacks on Ukraine’s basic infrastructure do not pose a military problem, and that if Kyiv responds to Russian demands, the problems of the Ukrainian people can be eliminated.

Ukraine, on the other hand, qualifies attacks that make life difficult for civilians as war crimes.

In his speech yesterday, President of Ukraine Volodymyr Zelensky said: “Together we resisted the war, which has been going on at full capacity for nine months now. Russia has not found and will not find a way to break you.”

Millions of Ukrainians lost electricity, water and heating at a time when temperatures across the country fell below zero.

About 48 hours after the attacks, Ukraine’s national energy company Ukrenergo noted that its power grid was still 30 percent below demand.

In a statement by Ukrenergo, the expression “Priority was given to critical infrastructure facilities in all regions. These are steam boilers, gas distribution stations, water supply, treatment facilities, public power lines.”

According to Ukrenergo, three nuclear power plants are currently operating in Ukrainian-controlled territories, the first in 40 years after attacks were halted for the first time in 40 years.

In his speech, Zelensky also accused Russia of constant shelling of Kherson in the south, from which it withdrew earlier this month. Local authorities noted that yesterday seven people were killed and 21 injured as a result of Russian shelling in Kherson.

Viewed from space at night, Ukraine appeared to be plunged into darkness.
Russia says it did not strike civilians during its invasion of Ukraine, which began on Feb. 24. International human rights activists, on the other hand, say attacks on civilian infrastructure across Ukraine do not agree with this assertion.

Volker Türk, President of the UN Human Rights Council, said in a statement: “These attacks are putting millions of people in extreme conditions and in terrible living conditions.”

Turk said: “In general, this situation creates serious problems in terms of international humanitarian law.”
Prosecutor Nigel Povoas, who is part of an international team of experts assisting Ukrainian war crimes investigators, noted that Russia’s attacks “were focused on destroying infrastructure essential to civilian life, such as heating, water, electricity and hospitals.”

“Each wave of attacks adds to the accusations against the Kremlin. These attacks have nothing to do with military targets. On the contrary, these attacks create a widespread atmosphere of fear, pain and suffering, especially among vulnerable people, to bring the Ukrainian people to their knees,” Povoas told Reuters news agency. “This reflects a criminal intent to cause death,” he said.

Russian President Vladimir Putin today met with the mothers of Russian soldiers at a televised meeting. Putin praised mothers for the sacrifices of their sons.

At the meeting, which was previously recorded on video, Putin is seen gathered around a table with his war mothers, and tea, cake and fruit were served at the meeting.

British Foreign Secretary James Cleverley, who visited Ukraine, said in a statement that the UK has contributed millions of pounds to help Ukraine.

An employee of the Kyiv branch of the International Commission on Missing Persons, headquartered in The Hague, said that more than 15,000 people went missing during the war.

Matthew Holliday, director of the commission’s European program, said it is not known how many people were forcibly relocated, detained in Russia, alive, separated from family members, or died and buried in mass graves.

Meanwhile, Ukrainians are gearing up this week to mark the 90th anniversary of the so-called Holodomor, when the Soviet Union starved millions of Ukrainians to death in order to export food.

The German Bundestag is expected to determine the Holodomor as genocide by a majority vote.

This week, a similar vote was held in Romania, Moldova and Ireland. Ukrainian Foreign Minister Dimitro Kuleba issued a statement praising the step taken by Germany “to honor the Ukrainian people.”

In November 1932, Soviet leader Joseph Stalin called on the police to collect all grain and livestock from expropriated Ukrainian farms, as well as seeds for planting the following year.

Timothy Snyder, professor of history at Yale University, describes the death of millions of Ukrainians from starvation as “premeditated mass murder.”

Two news about the investigation from the French judiciary to Macron. ...

China will discover if there is water on the moon – WORLD