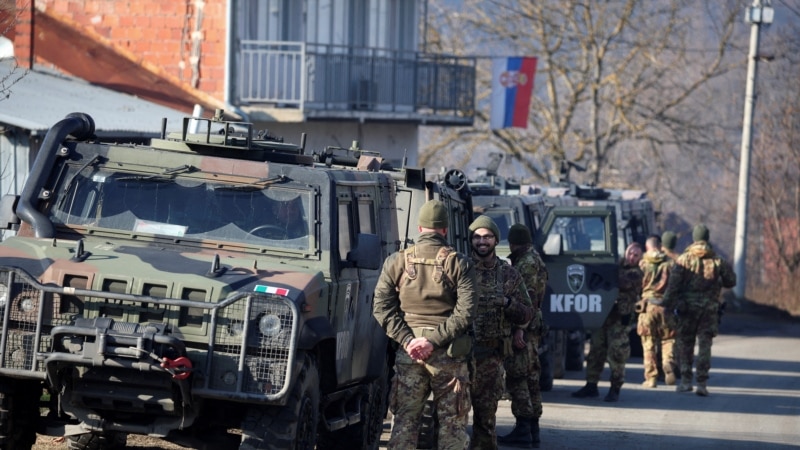 Protesting in the northern Kosovo city of Mitrovica, Serbs set up new roadblocks today, hours after the Serbian government put the army on high alert amid escalating tensions between Belgrade and Pristina.

“There is no need to panic, but there is reason to be concerned,” Serbian Defense Minister Milos Vucevic told RTS late last night.

Serbs living in northern Kosovo have barricaded roads in and around Mitrovica since 10 December. Protesters also clashed with police after a former Serbian police officer was arrested on suspicion of assaulting officers on duty during a previous demonstration.

The 50,000 Serbs living in Albanian-majority northern Kosovo refuse to recognize the government of Pristina and the state of Kosovo.

Serbs in Kosovo, who consider Belgrade their capital, are supported by Serbia.

“Kosovo cannot engage in dialogue with criminal gangs, free movement must be restored. There should be no barricades on any road,” the Kosovo government said in a statement yesterday.

The statement also notes that the police have sufficient capacity and readiness to intervene, but NATO is waiting for a response from Kosovo’s KFOR peacekeepers to a request to remove the barricades.

In a statement issued by KFOR, “we call on all parties to ensure security and free movement in Kosovo, and to avoid misleading rhetoric that will affect the dialogue process.”

Serbs living in the area are demanding the release of the detained policeman and other demands before removing the barricades.

What is the reason for the tension in Kosovo?

Kosovo declared its independence in 2008, almost 10 years after the guerrilla uprising against the repressive regime in Serbia.

However, Serbia still recognizes Kosovo as part of its territory and rejects allegations that it is fueling tensions and conflicts within Kosovo’s borders. Belgrade accuses Pristina of violating the rights of the Serbian minority.

In Kosovo, with a population of 1,800,000, ethnic Serbs, who make up 5 percent of the population, do not recognize the government of Pristina and Kosovo’s state institutions.

Ethnic Albanians make up 90 percent of Kosovo’s population. The Serbs refuse to pay the Kosovo energy company for the electricity they use and often attack the police.

Why has tension flared up again?

Ethnic tensions escalated again after 10 December, when Serbs set up roadblocks and clashed with police following the arrest of a former Serb policeman.

Recent events follow a months-long dispute over license plates. For years, Kosovo has demanded that the 50,000 Serbs living in the north replace their Serbian license plates with license plates issued by the Pristina government. The demand to change the license plates was prompted by Pristina’s desire to establish its authority over the lands under its rule.

On July 31, the Pristina government announced that two months would be given to replace license plates. This statement sparked protests. The government then agreed to extend the license plate change period until next year.

What do the Serbs want?

Serbs in Kosovo want to form a union of Serbian municipalities and operate with greater autonomy. Serbia and Kosovo have made little progress on these and similar issues in a dialogue process launched in 2013 under the auspices of the European Union.

What is the role of NATO and the European Union?

NATO has 3,700 troops in Kosovo to keep the peace. NATO says it will intervene within its mandate if the situation in the region destabilizes. The European Union Rule of Law Mission (EULEX), which traveled to Kosovo in 2008, has about 200 special police officers in the region.