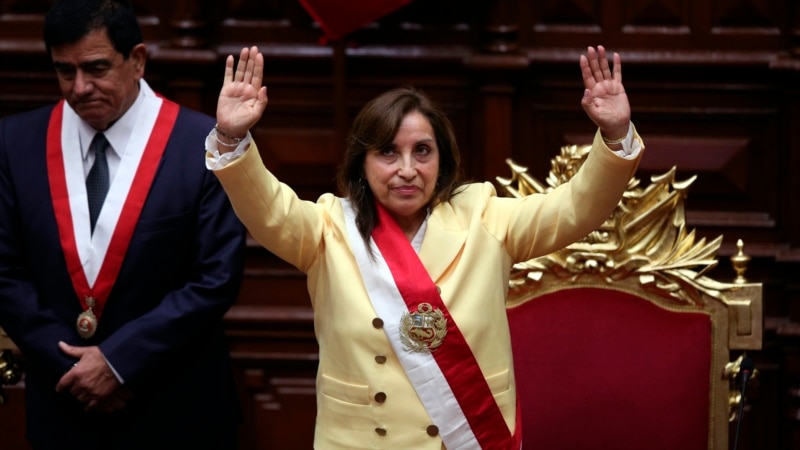 Peru’s new president was sworn in a day after the political turmoil that led to an attempt by leftist leader Pedro Castillo to overthrow the Congress in order not to lose power, but led to his impeachment and arrest.

Although the result was announced with enthusiasm and applause, Congress decided that Vice President Dina Boluarte would take the place of President.

Dina Boluarte, 60, has been sworn in as President of Peru until 2026. Thus, Boluarte became Peru’s first female president. Calling for political peace after months of instability in Peru, where two impeachment attempts were made, Boluarte said a new cabinet would be formed that would span the political spectrum.

Peru’s public relations ministry said yesterday in a statement that Castillo was detained and charged with “rioting” and “conspiracy” for violating the constitutional order.

Television channels broadcast footage of Castillo leaving the police station. According to reports, Castillo will be transferred to a police-controlled prison.

In his previous statements, Castillo said he would temporarily close Congress, form a “provisional government” and call for new elections.

These calls led to the resignation of Castillo’s ministers and accusations from both his own allies and the opposition that Castillo was attempting a coup d’état. The police and military warned Castillo that his decision to dissolve the Congress was unconstitutional. The police said they “intervened” in order to do their job.

There were small street protests across the country. In the capital Lima, people celebrated Castillo’s removal from office with Peruvian flags in their hands. Castillo’s supporters marched in the cities of Lima and Arequipa and clashed with police.

Large numbers of shielded and helmeted police officers were stationed around Government and Congress House, which were surrounded by metal barricades in Lima.

A positive message from America to the new government of Peru

In Peru, which has been shaken by political turmoil for many years, many leaders were accused of corruption, attempts were often made to initiate impeachment cases, and the terms of office of presidents were interrupted.

The final legal battle began in October when the Attorney General’s office filed a constitutional complaint against Castillo for allegedly running a “criminal organization” to profit from government contracts and obstruct an investigation.

Castillo said the allegations were a “smear campaign” by groups aimed at “taking advantage of and seizing the power that the people had taken from them in the elections.”

Castillo, a 53-year-old former leftist teacher, has been impeached twice during his tenure, which began in July 2021.

But after Wednesday’s attempt to dissolve Congress, his allies also left Castillo alone. Regional authorities stressed the need to ensure democratic stability in the country.

“America rejects any unconstitutional action by President Castillo to prevent Congress from doing its job,” US Ambassador to Peru Lisa Kenna tweeted.

Later Wednesday, a U.S. State Department spokesman told President Peru that he welcomed Boluarte’s appointment and said the U.S. would “support Peru within the framework of the unity government that President Boluarte has committed to creating.”

Political turmoil rocked the markets of Peru, the world’s second largest copper producer. However, experts believe that the removal of Castillo from office will ultimately yield positive results.

“Peru’s financial markets will be hit hard, but they won’t collapse thanks to a strong domestic foundation,” said Andrés Adabia of research and consulting firm Pantheon Macroeconomics.

broadcast by Voice of America Peru takes office as new president in the news houra-ber.com editors have no editorial intervention. News about the Assumption of the new President in Peru is automatically published on our website as it comes from the Voice of America website. in this district Peru takes office as new president The legal addressee of the news is the websites and agencies that published the news.