✕
© Copyright Center Credit 2022. All Rights Reserved.
Wednesday, December 7
Home›Economy›On this Election Day, millions of Americans will not be voting in English
Economy

On this Election Day, millions of Americans will not be voting in English 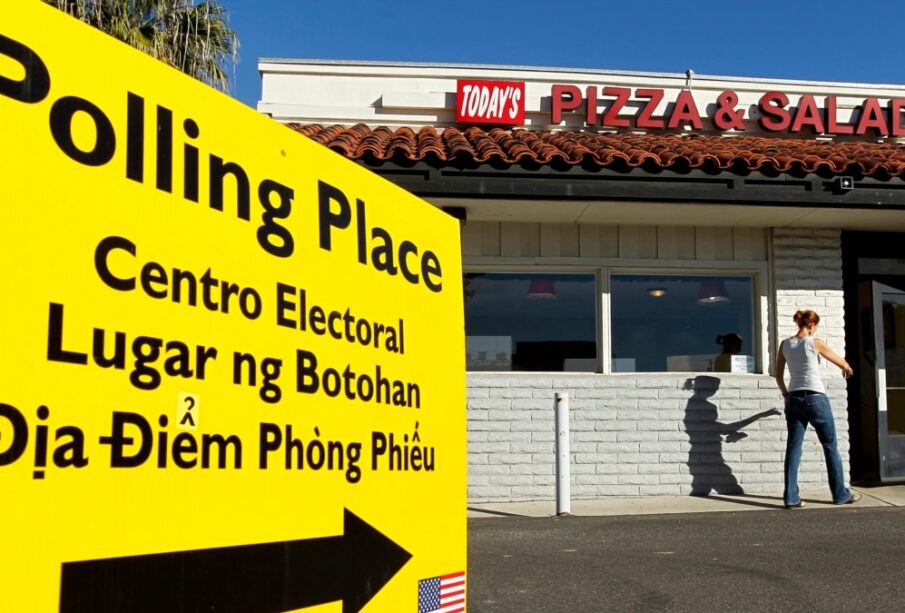 This Election Day, more than 80 million Americans will have the option to vote in a language other than English, thanks to a federal provision guaranteeing language assistance in the voting process for certain groups of people.

“The idea was to take groups that had been historically excluded from the electoral process, and the task was to make it more accessible for some of those groups,” says Gabe Osterhout, a research associate at Boise State University’s Idaho Policy Institute.

The original Voting Rights Act of 1965 focused primarily on the rights of African Americans in the South. The law was expanded in 1975 to certain language minorities—Native Americans, Alaska Natives, Hispanics and Asians—to make voting more accessible.

“English voting materials or information essentially serves as a literacy test that excludes people who may be literate in their native language, or may not be literate in any language, but acts as a barrier to being able to participate,” says Jim Tucker, Senior Special Adviser On the Voting Rights Bill of the Lawyers Committee for Civil Rights Under Law.

Every five years, the US Census Bureau determines which minority language groups should be assimilated with information in their primary language. This decision depends on whether more than 5% of the eligible voters in a district speak limited English, or if there are more than 10,000 eligible voters in a jurisdiction with limited English proficiency.

Local election officials are then required to provide voting materials, including ballots, in that second language.

In December 2021, the census listed 331 jurisdictions that meet this threshold before the 2022 midterm elections. It’s the largest number of jurisdictions covered by federal rule, 68 more than in 2016.

Most of the jurisdictions covered are counties and municipalities, but three are. California, Florida, and Texas must provide voting materials in Spanish in every statewide election, although some localities in those states are not required to provide bilingual ballots for their local contests.

More than 80 million voting-age citizens live in areas where election officials are required to provide language assistance to minorities.

While the US Department of Justice tells affected jurisdictions that they meet the guidelines and should provide language assistance, there is no internal mechanism in place to enforce the rule.

However, an analysis of registration and voting data in November 1996 and 2000 found evidence that “language provisions in the Voting Rights Act have significant and positive effects on the voting rates of covered language minorities.”

“We’ve really seen significant increases in participation from all language minorities covered, which includes four groups: American Indians, Alaska Natives, Latino or Spanish-speaking voters, and Asian Americans who speak Asian languages ​​since 1975, and a lot of that is directly attributable to Providing language for voting rights,” says Tucker, who is also the author of The Battle Over Bilingual Ballots.

He added that the language requirements do not place an increased financial burden on the counties covered.

“In many cases, there are no additional costs,” he says, “but even if there are, it’s not a true unfunded federal mandate, because the federal government has already provided funding to either offset, or in some cases, fully cover whatever costs the state might incur.” judicial.”

The Voting Rights Act was initially supposed to expire by 1970, but it has been re-authorized five times with significant bipartisan majorities. It was last re-certified in 2006 for a 25-year term.

“This is not a situation where it’s really a power grab by either side, because you only see such diversity in terms of political views and who the candidates are backing, and the political parties are supported among the English-speaking professional voters who get help,” says Tucker.

Mary Brennan, a professor of history at Texas State University, agrees that it’s a mistake to assume that people who vote in different languages ​​will vote a certain way.

“We make assumptions about how people of different languages ​​will vote. We say, ‘These are immigrants, so they will vote Democrat.’ … We can’t assume what these people will do. People who vote Spanish in Florida may be very conservative,” says Brennan. “I think it’s really dangerous to make assumptions about how people vote just because they vote in a different language.”

And even if not many people end up taking the opportunity to vote in their primary language, the effort is not wasted, in Osterhout’s view.

“Even if they don’t end up pursuing that right and don’t end up voting,” he says, “there’s still value in recognizing that there is a moral benefit to making voting easier.”

Prince Abdullah: The Iranian nation will not allow foreign interference and terrorists ...