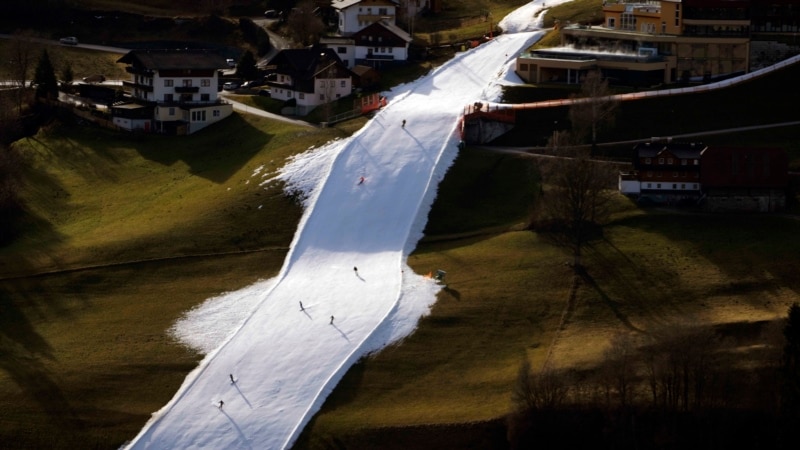 Sun and temperature up to 15 degrees during the day. The first week of the year in Germany is more like spring days than winter. Although meteorologists report a new temperature record almost every day, they pay attention to the fact that anthropogenic climate change leads to such a result.

In many German states, those who enjoy the Christmas and New Year holidays and go skiing are disappointed. Not only in Germany, but also in the neighboring countries of Austria, Switzerland and the Czech Republic, most ski resorts have stopped their work due to lack of snow.

In fact, the ski area on Mount Brauneck in the south of the city, where residents of Munich, the capital of the state of Bavaria, often ski, on Thursday evening closed its last ski run.

On Spitzingsee in the Miesbach region, which is considered safe for snow due to its location at an altitude of 1,100 meters above sea level, only two of ten runways were open on Friday. However, it has been reported that skiing is possible on icy artificial snow and in very difficult conditions on these tracks.

The Austrian city of Salzburg is famous for its ski resorts.

In addition to Germany, it is stated that in the Austrian and Swiss Alps, especially in ski centers below 2000 meters, there are no slopes with natural snow due to melting. Many ski centers are trying to make ski runs suitable for use with artificial snow. However, the fact that temperatures are too high for the seasons renders even artificial snow devices useless.

As a result, ski resorts are forced to stop their activities altogether, because the costs are too high and it is unprofitable due to the limited number of skiers coming to the pistes covered with artificial snow.

Ski resorts are forced to almost completely stop their activities in January in sections of the Alps, located in southern Germany, on the border with Austria.

The livelihoods of tens of thousands of businesses in the Alps depend directly or indirectly on winter tourism. Experts say there may still be snowy and cold periods in the Alps due to climate variability, but the general trend is that ski tourism will bring economic hardship for businesses in the future, especially in low to mid-altitude ski resorts.

The La Niña effect in Europe

Not only in Germany, but also in many European countries, the first days of the year were recorded as the hottest days of January. While temperatures rose 10 to 20 degrees Celsius above normal from France to Western Russia, temperatures were measured as 18.9 in Warsaw, Poland’s capital, and 25.1 in Bilbao, Spain.

Monthly and daily temperature records were also broken in the Netherlands, Latvia, Hungary, Romania, Denmark and Belarus. Meteorologists say temperatures in Europe could drop due to arctic air from the northeast, but temperatures are above normal and very little rain is expected across most of the continent until at least January 10.

An event that negatively affected the European climate was the end of La Niña, a weather phenomenon characteristic of the Pacific Ocean. While in recent years La Niña has been pushing warm water off the banks and into the open, cold water at the bottom has come out more. However, below-average seawater surface temperatures in the equatorial region are currently leading to reduced precipitation and higher temperatures in the northern regions, including Europe.

News of Molotov’s attack on the Turkish consulate in Marseille. News ...