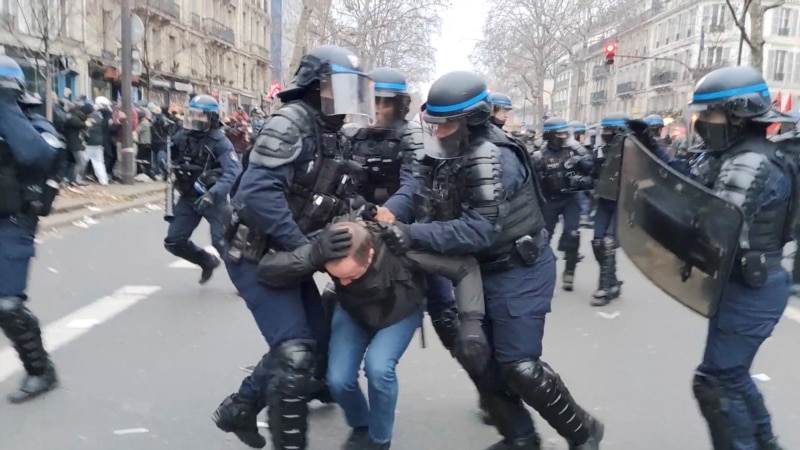 Workers demanding the withdrawal of a bill that would raise the retirement age from 62 to 64 in France have alerted the government with strikes and mass participation demonstrations.

According to the trade unions, 2 million workers across France and 1.12 million workers took part in the march, according to the Ministry of the Interior. The workers, who went on strike at the call of the 8 main trade union confederations of the country, in a peaceful and resolute voice sent an appeal to the government to “repeal the law.” The Union of Trade Unions again called for a strike on 31 January.

Just nine days after Prime Minister Elisabeth Bourne presented her draft pension reform, the unions called on all workers to take to the streets to block the reform.

The largest demonstration of recent years took place in France, with the massive participation of employees. From Paris to Marseille, from Strasbourg to Bordeaux, from Rennes to Lille and Toulouse, to the French overseas regions, millions of French workers protested against a government bill raising the retirement age from 62 to 64.

According to police, the march in Paris was attended by 80,000 people from health, education, transport and security, and 400,000 people, according to trade unions. There was nowhere to step in the rue de la République, the largest square in Paris, and there were a lot of people at the beginning of the march.

Workers marched behind union representatives with slogans “No pension in the grave”, “Macron repeals the law” and “Continue to the end”.

All the demonstrators protested against the pension reform, not just the “pensions” in the slogans. Demanding higher wages in the face of inflation, a more equitable distribution of wealth, taxing excess profits, and general doubt about Emmanuel Macron’s policies also figured in slogans and banners.

A total of 10,000 police officers were on duty to ensure the security of the demonstrations, of which 3,500 were in Paris. At the end of the celebratory demonstrations, in minor incidents that broke out around 5 p.m., the capital’s police detained 38 people on charges of “carrying prohibited weapons”, “throwing bullets” and “damaging state property”.

The last time workers in France staged such massive demonstrations against pension reform was in 2003 and 1995.

The unions showed unity for the first time in 12 years as all union officials, especially the CFDT and CGT, gathered under one banner.

Laurent Bergé, general secretary of the country’s largest union, the CFDT, expressed his satisfaction, saying participation in anti-pension reform demonstrations was “higher than they thought”.

Phillip Martinez, general secretary of the second largest confederation, CGT, said: “The unions have given employees confidence. This alliance is essential to success.”

Encouraged by the overwhelming success of the first demonstrations, the unions met in the evening and called for a general strike on 31 January.

Will the government back down?

President Emmanuel Macron, along with his 11 ministers, traveled to Barcelona for the “France-Spain Friendship Summit” on the day of the protest against his proposed pension reform.

The actions were followed by the Minister of Labor Olivier Dusso, who remained in Paris. Commenting on RTL radio after the demonstrations, Dussopt said: “Participating in the demonstrations was important. We must heed the messages given here.”

Bottom of the form

Emmanuel Macron, who speaks from Barcelona, ​​also assured that the government will pursue the pension reform “in a spirit of respect and dialogue, but with determination and responsibility.”

Macron said the reform is “democratically presented, approved and, above all, fair and responsible.”

Prime Minister Elizabeth Bourne noted that there was no violence during the demonstrations, as had been feared, and said: “I congratulate the trade unions for making this happen and the police for providing security.”

The prime minister called for “continuing debate and persuasion so that the law is passed.”

News about the decision to send patriots to Ukraine in Davos. ...

News of a spy case against a US citizen from Russia. ...