News from the US to Turkey to confirm NATO membership of Sweden and Finland. News headlines and events Last Minute Russia 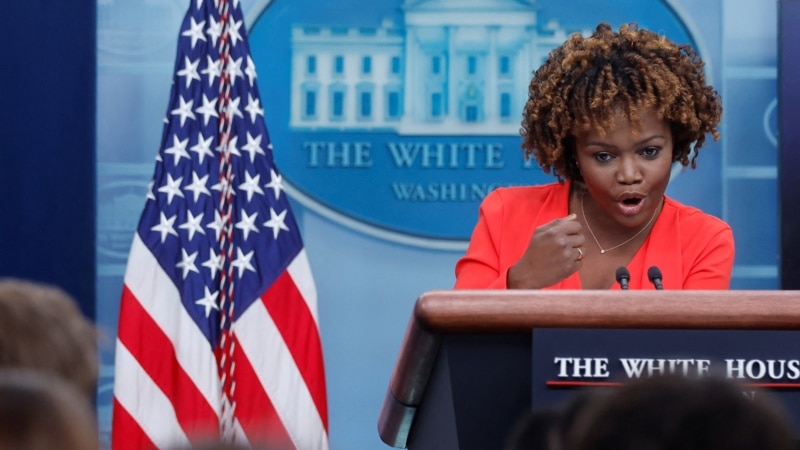 At the daily press conference at the White House, the membership of Sweden and Finland in NATO, as well as the position of Turkey, which has not yet approved the process of joining NATO for the two countries, came to the fore.

When questioned, White House Press Secretary Karine Jean-Pierre said she views Turkey as a reliable ally and called on the allies to complete the process of agreeing on the participation of the two countries in NATO as soon as possible.

White House spokesperson Karine Jean-Pierre was asked “does US President Joe Biden see Turkey as a credible NATO ally” in the context of the process regarding Sweden’s and Finland’s NATO membership.

Karine Jean-Pierre said: “We call on the remaining allies to complete the approval process as soon as possible.”

A White House spokesman, who chose not to comment on ongoing negotiations and a possible agreement between Turkey and the two countries, directed questions about the matter to the Turkish government.

Press Secretary Jean-Pierre urged allies that have not yet ratified the two countries’ NATO membership to complete the ratification process as soon as possible.

In February, Hungary announced that it would approve

Twenty-eight of NATO’s 30 members approved the participation of Sweden and Finland, which applied for NATO membership after Russia’s invasion of Ukraine, in their parliaments.

Turkey and Hungary are two NATO members that have not yet completed the ratification process. Hungarian Foreign Minister Péter Szijjártó said they would approve Sweden and Finland’s NATO membership when Parliament meets in February.

Haavisto said the experts’ talks with Turkey are going well, but they still see heated debates on the issue.

The Finnish minister mentioned Foreign Minister Mevlut Cavusoglu’s visit to the US and assessments linking Turkey’s request for F-16s and the process of approving the two countries’ NATO membership.

Finnish Foreign Minister: “The United States cannot solve all the problems, but if Turkey and the United States can agree on the military package that they are planning, if this package is given a green light, we hope this will help Sweden and Finland join NATO” .

Speaking to Reuters, Swedish Foreign Minister Tobias Bilström said that Ankara’s legitimate security demands had been met and that the time had come to approve the two countries’ applications for NATO membership.

NATO Secretary General Jens Stoltenberg said in a statement in Davos, Switzerland, where the World Economic Forum meetings were held, that he was confident that Turkey and Hungary would approve Sweden and Finland’s applications for NATO membership.

“Despite the differences, our partnership and common interests continue”

US State Department spokesman Ned Price told a daily press conference that there were occasional disagreements with Turkey, but they did not diminish the two countries’ partnership or obscure the fact that the two countries have common interests. “There are also core values ​​that we would like to keep as alliance partners,” Price said.

Asked about Turkey’s normalization process with the Assad regime in Syria, Price said: “We don’t think this is the time for normalization. Now is not the right time for countries to seek to improve their relationship with the Syrian regime. To understand this, one need only look at the violence that the Assad regime has used against its own people over the past 12 years. US “We believe it is necessary to pursue the goals set out in Security Council Resolution 2254,” he said.

Saying that against Turkey’s purchase of the F-16 should be addressed to these members of Congress, Price said: “We will continue to work with the Turks on our own priorities. This is the war in Ukraine and the constructive role that Turkey is playing here. , bridge between East and West. “We will continue to work together on issues such as food security and our common anti-terrorism calendar,” he said.

“We call on Turkey, Sweden and Finland to compromise”

Price said they urged Turkey, Finland and Sweden to find a way for these two countries to become NATO members quickly, and that there was a lot of support within the NATO alliance in this regard. Price stated that the US Congress received a lot of support for Finnish and Swedish membership in NATO. Price’s spokesman said they would continue to encourage Turkey, Finland and Sweden to engage in a constructive dialogue.

Price said: “We have a very constructive relationship with Turkey. We are grateful for the useful role that Turkey has played in addressing the most difficult challenges of our time. This includes Russian aggression in Ukraine. would be impossible, especially on such a scale.” I don’t think we’re exaggerating,” he said.

“Expressing concern about the suppression of civil society”

Price noted that, despite common values ​​and interests, they continued to talk about divisions and oppression of civil society through the judiciary; He noted that leaders in the press, politics and the business world have expressed deep concern about lengthy pre-trial detentions on charges as broad as supporting terrorism.

“The Turkish people, like peoples in other parts of the world, have the right to exercise their human rights and fundamental freedoms without fear of retribution. Freedom of expression and the right to peaceful assembly are also among Turkey’s commitments and commitments in its constitution and are against international law,” Price said.

“We call on Turkey to respect and guarantee freedom of speech, a free and fair trial, the independence of the judiciary and other human rights and fundamental freedoms, the government to stop prosecution and respect the rights and freedoms of the Turkish people,” Price said. “Our Turkish allies know our position and our messages. The messages we make privately and publicly are the same,” Price said.

Asked about Presidential spokesman Ibrahim Kalin’s statement that a military operation in Syria could begin at any moment, Price said they had openly expressed their concern about this, but Turkey was facing legitimate concerns about its security.

Recalling that more terrorist attacks are being carried out in Turkey than in the territory of all other NATO allies, Price noted that they also expressed their unwillingness to see unilateral steps that would hinder the progress made by the international community in the fight against ISIS in Syria, both in public and personal meetings.

Minister of Economy of Ukraine Sviridenko spoke at the World Economic Forum: ...

Decision on a 4-day strike of medical workers!