News about the suspension of support for the Hungarian Foundation. Last Minute WORLD headlines and events 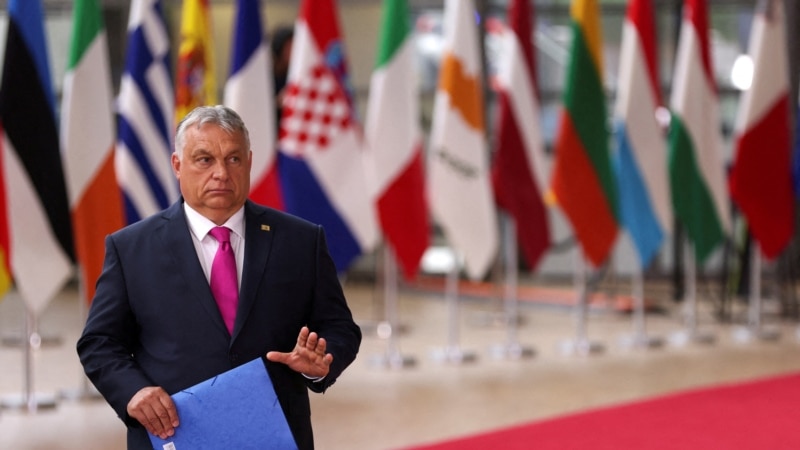 Arm wrestling between the European Union and Hungary is getting tougher.

The EU Commission has proposed to suspend the payment of 13 billion euros to Hungary, which has not taken the necessary steps in the field of judicial independence and the fight against corruption.

An 18 billion euro aid package to Ukraine from Hungarian Prime Minister Viktor Orban and threats to veto Sweden and Finland’s NATO membership have not changed the decision of the European Commission.

The commission expressed its opinion to the leaders that they should freeze the payment of 13 billion euros.

The European Commission demanded that after months of negotiations and discussions with Budapest, no progress should be made on the independence of the judiciary or the fight against corruption, so the payment of 13 billion euros, which was supposed to be transferred to Hungary, should not be made.

He demanded that these funds remain suspended unless the Hungarian government implements the fundamental reforms demanded by Brussels.

Hungarian steps are not enough

Last-minute steps taken by Hungary, which has taken many anti-corruption legal steps to convince the EU, were deemed insufficient by the EU Commission.

European Commission Budget Commissioner Johannes Hahn said the decision was “objective”, stating that “all Hungary’s assessments are based on facts and figures, not feelings or assumptions”.

Prime Minister Viktor Orban, in particular, has multiplied the veto on the minimum global tax on transnational corporations and on EU aid of 18 billion euros promised to Ukraine until 2023, and even in the Hungarian parliament on the entry of Sweden and Finland into NATO. He followed the strategy of twisting the arm of Brussels in this armwrestling, postponing the vote until after the decision on funds.

However, despite these threats from Budapest, the Commission failed Orban’s strategy. It is alleged that pressure from the European Parliament influenced the decision of the commission, which is expected to make a moderate decision.

Inflation in Hungary is 21 percent.

Hungary, which has broken an inflation record of 21 percent among EU countries, needs 13.3 billion euros, which is expected to be provided from Brussels.

For this reason, after the decision of the Commission, the statements of the Budapest administration went in such a way as to defuse tensions.

Hungarian negotiator Tibor Navrasic said: “There is nothing new in this decision. We will implement the necessary and desired additional measures in 2023. We have no doubt that we can convince the Commission that there is no need to suspend funding.” Orban’s cabinet chief Gergely Gulyas also commented on the decision, stating: “We believe that this decision was caused by a misunderstanding on several points.”

The decision of the EU Commission concerns two separate procedures. First, the principle of “conditionality”. EU Member States can activate this mechanism in the face of the risk of using their funds for purposes such as “corruption, bad faith purchase”, following the recommendation of the EU Commission with a “conditional mechanism” that has been in force since January 2021. .

In September, Brussels determined that the €7.5 billion Cohesion Fund was “at risk” and asked Budapest to take 17 separate measures to tackle the country’s widespread corruption.

Among these, he wanted legal provisions to be introduced, such as reducing conflicts of interest by publishing asset declarations, stopping single-bidder bidding, and increasing the number of bidders in public auctions. This gave the Hungarian government until November 19 to submit its file containing these successes to the EU.

Johannes Hahn, Commissioner for the Budget of the European Commission, noted that after Hungary submitted its file, despite some progress, all the results required by Brussels were not achieved.

“Based on our assessment, it is important to say that Hungary is moving in the right direction. We can conclude that, for the time being, conditionality regulation is the right tool to apply. Because we received commitments from the Budapest administration to carry out reforms that would otherwise never have happened. ‘ Khan said.

In addition to the “conditionality mechanism”, the EU Commission has also suspended a €5.8 billion fund under another parallel fund, the COVID recovery fund.

The commission gave the green light to the plan to rebuild Hungary. However, Hungary had to fulfill 10 more basic conditions in order to agree to the allocation of the first tranche of 800 million euros. Thus, the number of legal and political reforms expected from Hungary has reached 27.

Most of the requested reforms are related to the principle of “independence of the judiciary”, which is considered a core value for the EU. The EU is asking Budapest to “change the functioning of the Supreme Court to give more powers to the Council of Judges, limit the risks of political influence when nominating its president, and prevent the Constitutional Court from “reviewing decisions made by judges” at the request of the Hungarian government.

The final decision is made by the leaders of the EU.

“No funds will be distributed until the key milestones are properly implemented,” warned Commission Vice President Valdis Dombrovskis.

Now the ball is in the lead of the EU. The Commission appears to be confident that its proposal will achieve the “necessary qualified majority”.

Hungarian Prime Minister Viktor Orban is expected to raise the issue at the EU Heads of State and Government Summit to be held in Brussels on December 14-15.

Minister Kirisci will have official contacts in Slovenia and Italy