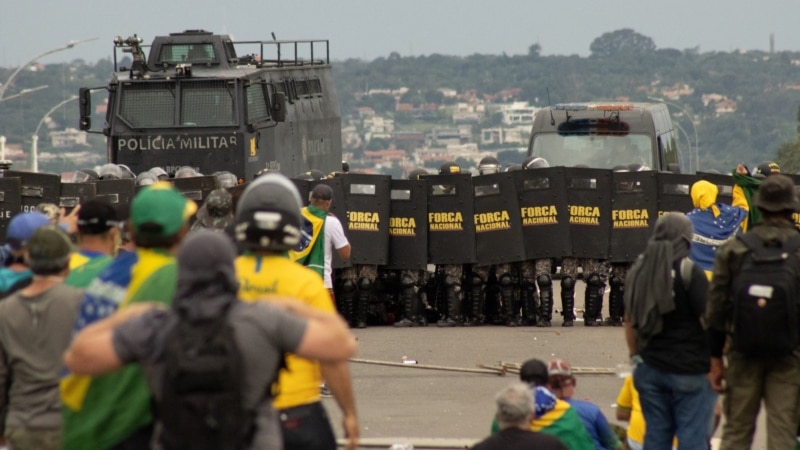 Jair Bolsonaro, the former President of Brazil, whose supporters raided government offices by refusing to recognize the election results, is in Florida, USA. Members of Congress are calling for the far-right leader, who arrived in Florida two days before his term expires, to be sent back to Brazil.

Jair Bolsonaro, the Brazilian ex-president who lost the October 30 election to his radical left rival Lula da Silva but challenged the results, arrived in Florida, USA, two days before the end of his presidential term.

Following the events in Brazil, the administration of Democrat Joe Biden has faced pressure to send Bolsonaro back to Brazil, who has close ties to former Republican President Donald Trump.

Joaquin Castro, Democratic Representative representing Texas, told CNN yesterday: “The United States should not harbor an authoritarian leader who inspires internal terror in Brazil. Bolsonaro should be sent back to Brazil,” he said.

Similarities to the January 6 attack on Congress

The raids on public institutions such as the Congress building, the presidential palace and the building of the Constitutional Court in Brazil by Bolsonaro’s supporters who did not recognize the results of the October elections were reminiscent of the January 6 attack on the Congress, a symbol of democracy. which took place in the USA two years ago.

Bolsonaro also claimed that there were irregularities in the elections, despite the absence of any evidence.

Many Democratic congressmen and political analysts who have assessed the events in the US press have drawn attention to the similarities between the process leading to the terrorist attack on the US Congress on January 6 and the events in Brazil.

“Two years after January 6, Trump’s legacy continues to poison our hemisphere,” said Bob Menendez, chairman of the U.S. Senate Foreign Relations Committee. “Democracy must be protected and bad actors must be held accountable,” he said.

Alexandria Ocasio Cortes, a member of the Democratic House of Representatives, also referred to the January 6 terrorist attack in America, when Trump supporters who did not recognize the results of the presidential election stormed the Congress building.

Sharing a message about this on his Twitter account, Cortés wrote: “About 2 years after the fascist attack on the US Congress, we see fascist movements abroad trying to do the same in Brazil.”

How long can Bolsonaro stay in the US?

Speaking to Reuters on condition of anonymity, a US consular official and a senior former diplomat said the former Brazilian president most likely came to the US on an A-1 visa issued to heads of state.

Under normal circumstances, an A-1 visa is issued when a person leaves work; however, the possibility remains that his A-1 visa is still valid, as Bolsonaro left Brazil and arrived in the United States before his visa officially expired.

An official with experience revoking former head of state visas says there is no limit to how long you can stay in the US with an A-1 visa.

A US State Department spokesman contacted by Reuters said that visa records are kept confidential as required by US law, and therefore details of individual visa files could not be released.

Jair Bolsonaro, Brazil’s former far-right leader, has been accused of instigating a non-recognition movement by putting unfounded allegations of wrongdoing on the agenda.

Leftist leader Lula da Silva, who won the election in October, blamed Bolsonaro for what happened: “He is promoting this through social networks from Miami. “Everyone knows that the former president had several speeches promoting this,” he said.

Jair Bolsonaro, on the other hand, denied the allegations in a tweet he shared on Sunday, claiming that the Congressional raid had crossed the line of peaceful protests.

There are four separate investigations against the Brazilian politician, which have been submitted to the Constitutional Court. These investigations include allegations that he used federal police to protect his sons, spread false election claims, and protected a disinformation troll farm.

All of these investigations are conducted by Constitutional Court Judge Alexandre de Moraes. Bolsonaro’s supporters, on the other hand, argue that Judge Moraes is a despot who hinders free speech.

Lawyers also note that Bolsonaro could be the subject of a new investigation into anti-democratic protests in Brazil, also launched by Constitutional Court Judge Alexandre de Moraes, during which many people have been arrested so far.

The President, who is in power under the Brazilian Constitution, can be arrested if convicted by the Constitutional Court. Once presidents leave office, they can be tried by lower courts, which can act more quickly.

Can Bolsonaro be returned?

Lawyers say that the Brazilian authorities may issue an arrest warrant for Bolsonaro, although this is unlikely, it is not impossible.

If Supreme Court Judge Moraes issues an arrest warrant while Bolsonaro is on US soil, the former president must return to Brazil and surrender to police.

It is argued that if Bolsonaro refuses, Brazil could send a red notice through Interpol, which would be caught by federal officials in the US.

Brazil should formally request extradition if Jair Bolsonaro is detained on US soil.

The White House said they have not yet received an official request. National Security Adviser Jake Sullivan, who was in Mexico City for a US-Mexico-Canada summit with US President Joe Biden, said US officials had no direct contact with Bolsonaro, who is believed to be in Orlando.

Lawyers also note that Bolsonaro’s direct role in the events must be proven by indisputable evidence.

The press reflected the news that Jair Bolsonaro and his inner circle met with advisers to former US President Donald Trump in November, that is, after the elections in Brazil.

Last November, the Washington Post reported that Bolsonaro’s son Eduardo Bolsonaro, who is a congressman, came to Florida after the October 30 election, met with Trump in Mar-a-Lago and spoke on the phone with former Trump advisers.

According to the report, the agenda for these talks was “the impact of protests by Bolsonaro’s supporters, possible objections to the election results, internet censorship and freedom of expression.”

“Bolsonarism uses the same strategies as Trumpism,” Paulo Calmon, a political scientist at the University of Brasilia, told the Associated Press news agency. “Our January 8th was clearly copied from the attack of the Congress on January 6th, which is unprecedented in Brazilian politics.”

Describing former President Bolsonaro as the Trump of Latin America, the Brazilian political scientist says: “The unfortunate events represent another attempt to destabilize democracy and show that the authoritarian and populist radicalism of the Brazilian far right continues to operate under the command of the former president. Bolsonaro”.

“An attack on democracy and the will of the people”

US President Joe Biden called the events in Brazil “an attack on democracy and the peaceful transfer of power.”

President Biden stressed that they fully support democratic institutions in Brazil and that the will of the Brazilian people must not be shaken.

White House National Security Adviser Jake Sullivan, in a message he tweeted yesterday, stressed that they condemn any attempt to weaken democracy in Brazil and that the United States stands unwaveringly in support of Brazil’s democratic institutions.

Good news for pilgrims: there are no age and age restrictions this ...