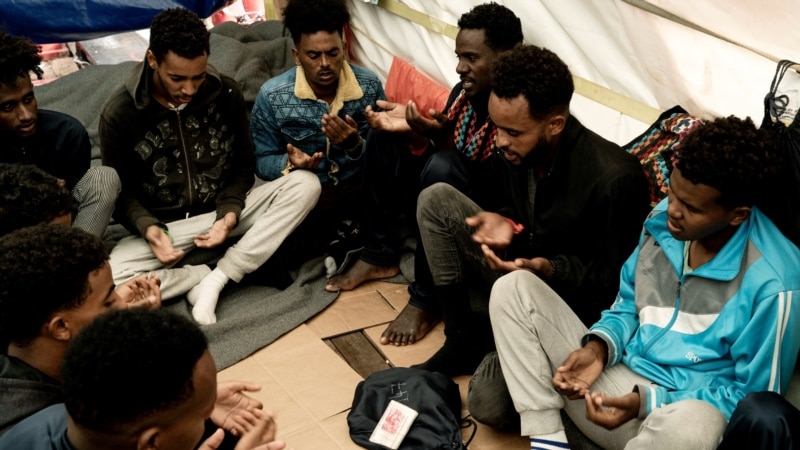 PARIS. After French Interior Minister Gérald Darmanin announced that he would be deporting 44 out of 234 immigrants rescued by SOS Mediterranee’s Ocean Viking, 26 immigrants who could not afford to return after they managed to reach Europe across the Mediterranean. run, found.

The fate of the remaining immigrants will be decided by the local appeals court.

A holiday village near the port was turned into a “temporary reception center for migrants” for 234 immigrants who anchored in the French military port of Toulon, where asylum requests were processed after examining the health and intelligence of immigrants.

Interior Minister Gérald Darmanin, answering questions from the French National Assembly two days ago, announced that 60 immigrant asylum applications had been accepted but 44 had been rejected and those 44 immigrants would be deported as soon as possible.

Following this announcement, 26 out of 44 migrants, mostly Eritreans, left the temporary shelter center to reach their relatives in other European countries.

The authorities said that these young people lost track. The Governorate of the Var region reported that most of the refugees were under 18, 3 of them on the night of the minister’s statement and 23 of them last night. The governor’s office noted that the number of immigrant minors awaiting deportation in the camps had dropped to 18.

According to French law, the only condition for leaving the center is to apply for asylum. Earlier this week, the French Agency for the Protection of Refugees and Stateless Persons (Ofpra) examined the situation of migrants from Sudan, Mali, Syria, Eritrea and Bangladesh.

At the end of the investigation, it was determined that approximately 60 immigrants were eligible to apply for asylum. It is planned to distribute these 60 individuals to 11 EU countries.

Their fate is in the hands of the court

The fate of the 120 migrants who remained in the camp awaiting an official decision is in the hands of the Aix-en-Provence Court of Appeal.

“If they are released, they will be able to return to the region and apply for asylum. If they decide otherwise, they will return to the temporary detention area to continue the expulsion process,” says Alexandre Moro, president of the Association of Border Assistance Foreigners (Anafe).

These migrants, considered minors, were not in a closed waiting area, unlike the other 190 or so adults who arrived in Toulon last Friday.

The Ministry of the Interior, which found doubts about the ages of the immigrants, planned to send these young people to the Judicial Youth Protection Service of the Ministry of Justice to determine their real ages after completing a health and safety check. However, the immigrants left the reception center where they were kept without waiting for these stages.

Jean-Louis Masson, head of the Var region, said: “France is not a desirable destination for immigrants of certain nationalities. These 26 minors, mostly Eritreans, decided to join their families and relatives living in other European countries such as the Netherlands, Luxembourg, Switzerland or Germany. “We don’t have legal grounds or authority to stop this. Now they have chosen illegal paths,” he said.

The regional province of Var is assisting some 2,300 minor migrant children trying to enter the country illegally.

Var district, which is full of childcare facilities, has applied to send 18 new immigrants to other provinces.

broadcast by Voice of America Immigrants being deported by France are fleeing in the news houra-ber.com editors have no editorial intervention. News about migrants fleeing France for deportation is automatically published on our website as it comes from the Voice of America website. in this district Immigrants being deported by France are fleeing The legal addressee of the news is the websites and agencies that published the news.

Condolences from the Ministry of Foreign Affairs to Gaza – Kent News ...