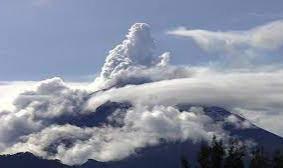 MEXICO CITY (UAV) – Another eruption has occurred at the Popocatepetl volcano in Mexico.
According to a daily report released by Mexico’s National Center for Disaster Prevention (Cenapred), the Popocatepetl volcano has erupted over the past 24 hours, emitting gas and smoke 52 times from the volcano’s vent. The report said that the ash that came out of the vent of the volcano and mixed with the air as a result of eruptions, under the influence of the wind, spread to the northeast. In addition, while stating that the volcano’s eruption is expected to continue on a low to medium scale, authorities have warned residents in the region to stay away from the volcano’s vicinity due to the possibility of an eruption at any moment. , due to stones and pebbles that can get into the environment. Popocatepetl, which translated from the Aztec Nahuatl language means “smoking mountain”, is the second largest volcano in North America with a height of 5,452 meters. 16 kilometers north of Popocatepetl, whose crater is 900 meters in diameter and 150 meters deep, is its twin volcano Istaxihuatl.
The Popocatepetl volcano, which increased in activity last year, is fifth among the volcanoes expected to erupt in the next few years, according to scientists from the University of Manchester.

Zelensky: “The most important task for all of us is to win ...