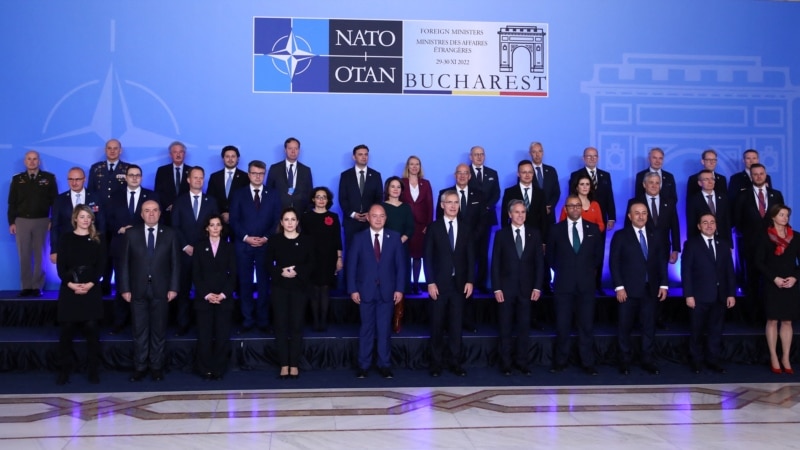 NATO foreign ministers met in Bucharest, the capital of Romania, one of the strategic areas on the alliance’s eastern flank, to help the Ukrainian people and army resist Russian bombardment in winter conditions.

Stoltenberg said: “NATO continues to support Ukraine. There is no turning back.”

In a statement ahead of the meeting, Secretary General Stoltenberg called on NATO allies to increase their support for Ukraine ahead of a particularly harsh winter in the country due to food, water and electricity shortages caused by Russian attacks.

Stating that Russian leader Putin “used winter conditions as a weapon of war because he lost at the front”, Jens Stoltenberg said that in addition to air defense systems and ammunition, he went to Kyiv; He noted that they will provide “non-lethal” military equipment, medical supplies, winter gear, drone jammers, generators and fuel oil.

Stoltenberg said that, in addition to solidarity with Ukraine, they will also discuss the security situation in the Black Sea and the Western Balkans, as well as ways to overcome the challenges posed by China’s coercive policies.

The Secretary General also stressed that NATO Foreign Ministers will also meet with the Foreign Ministers of Georgia, Moldova and Bosnia and Herzegovina to discuss how to provide strong and rapid support to these countries.

In a video message released last night, Ukrainian President Volodymyr Zelensky warned the people of Ukraine “of the risk of new Russian attacks that could deprive millions of people of heat, drinking water or electricity.”

Slovak Foreign Minister Rastislav Kačer, who was present at the meeting, said: “The next few months will be a big test for all of us. For Ukraine this is an existential question, for us it is a moral question. Ukraine needs it while it needs it.”

Lithuanian Foreign Minister Gabrielius Landsbergis also urged alliance members to expedite deliveries to Kyiv, adding: “My message to the other ministers present at the NATO meeting is very simple: stay calm and give tanks.”

Declaring that the winter months will be “terrible” for Ukraine, diplomats say the US and EU are mobilizing so Ukraine can confront Russia in winter conditions.

The United States is working with American companies and European countries to find equipment to repair high-voltage networks damaged by the Moscow attacks.

France and Germany are preparing to send up to 100 power generators. NATO, on the other hand, continues to pressure arms manufacturers to speed up their production.

NATO Foreign Ministers will also discuss Ukraine’s application for NATO membership at a meeting in Bucharest. On this occasion, Secretary General Stoltenberg said: “We have stated that Ukraine will become a member, I expect the Allies to maintain this position. However, now the focus is on supporting Ukraine. We are in the midst of a war and therefore we need allies to provide military, humanitarian and financial support to Ukraine. “We must not do anything that could undermine its unity,” he said.

After the meeting, Cavusoglu tweeted: “At the trilateral meeting of Turkey-Sweden-Finland foreign ministers; We appreciated the steps taken under the Tripartite Memorandum and underlined our expectations.

Cavusoglu: “War and diplomacy can be waged at the same time”

Foreign Minister Mevlut Cavusoglu took part in a forum organized by the Aspen Institute and the German Marshall Fund in Bucharest, as well as in a meeting of NATO foreign ministers.

In his speech at the forum, Cavusoglu stated that Turkey is under threat and said: “Allies must be with Turkey. It should not be forgotten that Turkey is the ally most targeted by terrorism.”

Emphasizing that “a collective response must be given” to the problems that threaten countries, no matter where they come from, Minister Cavusoglu said that this issue should not be selective.

Foreign Minister Cavusoglu, arguing that “war and diplomacy can be waged at the same time” in the war in Ukraine and emphasizing that Ukraine needs a just peace, said: “This is what we, as Turkey, are trying to do. On the one hand, “We strongly support the territorial integrity and sovereignty of Ukraine. “We continue to provide material assistance. At the same time, we have taken various steps to prevent this conflict from spreading elsewhere and reduce tensions,” he said.

Cavusoglu said that within the framework of personal meetings, Turkey plays an important role in bringing the parties closer and using diplomatic means, including the grain agreement and the exchange of prisoners.

Explaining that tensions in the Black Sea were prevented by Turkey’s strict implementation of the Montreux Straits Convention, Minister Cavusoglu said that inspections in the Bosphorus were ongoing and that no Russian aircraft had flown to Syria via Turkey.