NATO and the EU have signed a Statement of “Strengthening Cooperation”. News headlines and events Last Minute Russia 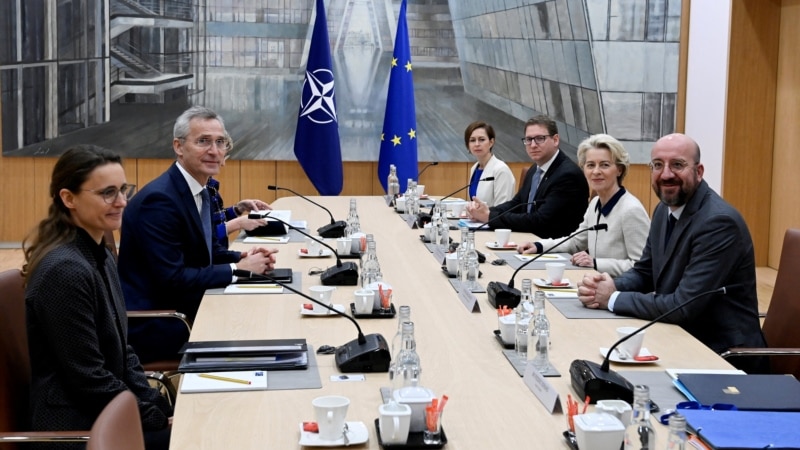 NATO and the European Union, which have grown closer since Russia’s invasion of Ukraine and have been working together in support of Ukraine since February 24, have formally signed a joint declaration to expand their cooperation in the face of the Russian threat.

NATO Secretary General Jens Stoltenberg, drawing attention to the growing “geostrategic competition” in the world, said that they are striving to take EU-NATO cooperation to a new level.

Stressing that with the participation of Sweden and Finland, NATO will protect 96 percent of the EU territory, Stoltenberg said: “I believe that Turkey and Hungary will also sign accession protocols as soon as possible.”

The text, signed by the heads of the two neighboring organizations in Brussels, is the third text on security cooperation signed between the EU and NATO after joint declarations in 2016 and 2018.

At a press conference following the signing ceremony, Secretary General Jens Stoltenberg underlined the importance of the declaration of cooperation: “Putin sought to take over Ukraine in a few days and divide us. Both of his plans failed. Today, NATO and the EU are working very hard together. supports Ukraine, which strongly resists Russia. We must continue to strengthen NATO’s vital transatlantic link, the partnership between NATO and the EU. And together we must continue our support for Ukraine. a world of growing strategic competition, authoritarian actors, the military, and the military are challenging our interests, values, and democratic principles through political, economic, and technological means. We are determined to take EU-NATO cooperation to a new level. Our statement makes it clear that NATO remains the backbone of our collective defense and plays an important role in Euro-Atlantic security,” he explained.

Stating that with the participation of Sweden and Finland, NATO “will protect 96 percent of European lands,” Stoltenberg said he believed Turkey and Hungary would pass accession protocols through their parliaments as soon as possible. Turkey vetoed. Secretary General said:

“I believe that the accession process of Finland and Sweden to NATO will be completed and all countries, including Turkey, will ratify it. But let me remind you what happened. It was the fastest NATO entry process in history. All countries voted for Finland and Sweden, including Turkey at the Madrid summit in June. And 28 countries, except Hungary and Turkey, quickly ratified the accession protocols. At this summit, a memorandum was signed between Turkey, Sweden and Finland. As part of this agreement, arms limitation exports to Turkey have been stopped. Counter-terrorism work continues. There are legitimate security concerns. No NATO country is under terrorist attacks as much as Turkey. In addition, we must understand that the situation in Finland and Sweden is very different from before .NATO has expanded its presence in the region. The ministers and ambassadors of these two countries are more involved in NATO meetings, committees, NATO structures. Of course, the participation of the Turkish and Hungarian parliaments. Approval of the process is important. But I’m sure it will happen.”

Charles Michel, President of the European Council, said that “Putin wanted ‘less NATO’ but achieved the opposite”, adding that “NATO and the EU are stronger together.” Stating that the EU is getting closer to NATO than ever before, Charles Michel, citing fears that Europe’s strategic strengthening efforts will harm NATO, said: “A stronger Europe means a stronger NATO. The sovereignty and strategic autonomy of Europe is always more necessary. than ever,” he said.

In a joint statement signed by Charles Michel, “The two organizations play a complementary and harmonious role in maintaining international peace. A stronger and more capable European defense makes a positive contribution to global and transatlantic security, and to a greater extent to NATO.” “.

Von der Leyen, President of the European Commission, touched on four new issues on which cooperation will be emphasized and announced that NATO and the EU will work together on “hybrid and cyber threats, new technologies and space, the consequences of the climate crisis.” and malicious interference in terms of information.” Von der Leyen drew attention to China’s growing ambitions in the world, saying: “While the Russian threat is the immediate threat, it is not the only one.”

Von der Leyen added that both organizations will “continue to support the brave Ukrainian people” in unity.

“As the security threats and challenges we face grow larger and larger, we will take our partnership to the next level. The parties undertake to mobilize all means at their disposal, political, economic or military, to achieve common goals in the interests of billions of their citizens, ”the statement says.

Of the 27 members of the European Union, 21 are also members of NATO. With the approval of Sweden and Finland by Turkey and Hungary, if these two countries join the organization, this figure will rise to 23. As Stoltenberg noted, the proportion of “European territories protected” by NATO, consisting of 30 members, will also rise to 96 percent.

News of negotiations on military cooperation between Sweden and the United States. ...

News that Marders will be delivered to Ukraine instead of Greece. ...