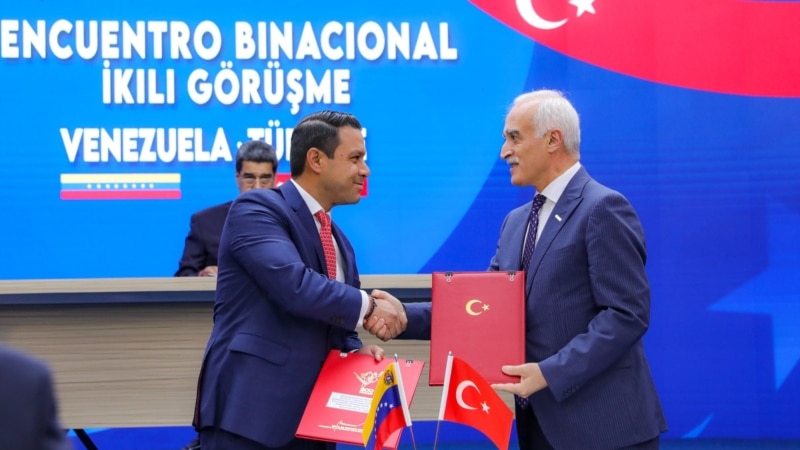 Commerce Minister Mehmet Mus held high-level contacts, including with President Nicolás Maduro, during his visit to Venezuela, and businessmen held more than 1,300 meetings. A memorandum of understanding was signed aimed at expanding trade and economic relations between the two countries.

The event, which was attended by Venezuelan President Nicolás Maduro and Oil Minister Tarek El Aissami, signed a memorandum of understanding between the Foreign Economic Relations Council (DEIK) and the Venezuelan International Center for Industrial Investment (CIIP) to expand commercial and economic relations between the two countries.

Speaking at the event, which was broadcast live on television, after the signing ceremony, Maduro said that the agreement will serve the industrial development and growth of trade in Venezuela.

Maduro, who began his speech with the words “Selamunaleykum” of the Turkish delegation in the hall, said that “he sees in President Tayyip Erdogan, who has not spared his support since 2017, his older brother.”

Saying that he had a special meeting with Moush before the broadcast, Maduro noted that they had set big goals for expanding economic cooperation and investment between the two countries.

Calling on Turkish investors to invest in sectors such as food production, trade, industry, tourism, energy and mining in Venezuela, the President said that his country is ready to cooperate with Turkey in the oil, petrochemical and gas fields.

Emphasizing the importance of increasing the number of direct flights of Turkish Airlines (THY), which also provides cargo transportation, from four to seven per week, Maduro said: “The product delivered by Turkish Airlines cargo service from Istanbul arrives in Caracas or Venezuela at 12.5 hours on By plane A container loaded on a ship reaches Turkey in 25 days.”

Mush: “There are opportunities for cooperation in many areas”

The Minister of Commerce noted that there are opportunities for cooperation in Venezuela in many sectors such as food, energy, mining and tourism, as well as in the field of contracting services.

During a visit to Mush Venezuela, Vice President Delcy Rodriguez, Minister of Science, Technology, Education and Health Gabriela Jimenez, Minister of Tourism Ali Paredes; He also met with such names as Minister of Culture Ernesto Villegas and Minister of Transport Ramon Velázquez.

“More than 1300 interviews from businessmen”

It was reported that 62 representatives of companies operating in almost twenty different sectors of Turkey, from transport to cosmetics, had more than 1,300 face-to-face meetings with 306 Venezuelan companies.

Further development of economic relations is expected after the signing of the Agreement on the Promotion and Protection of Mutual Investments between the two countries in March.

EU countries are preparing for a new step against migration. Last ...