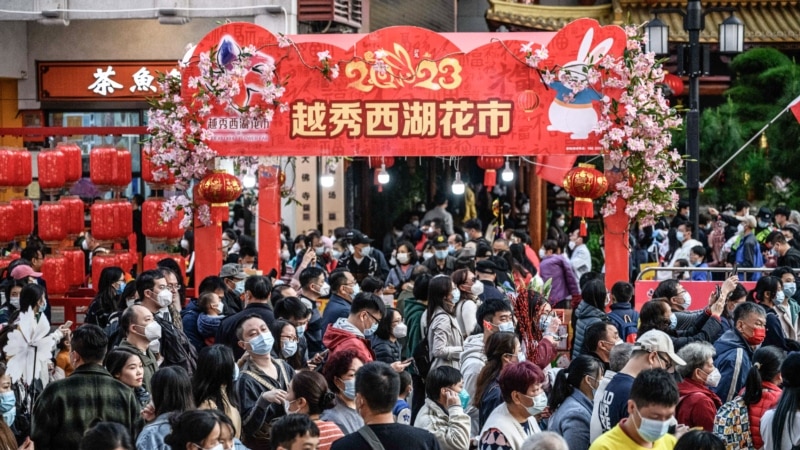 The fact that many Chinese have started taking trains and buses to their hometowns around New Year celebrations has heightened fears of a new wave of COVID-19 infections, which officials say have reached their peak.

Chinese state media reported that Deputy Prime Minister Sun Chunlan said the epidemic was at a “relatively low level.” Health officials, on the other hand, noted that the number of patients hospitalized and in critical condition has begun to decrease.

But with the Beijing government lifting strict epidemic control measures last month and conducting mass testing, there are questions that concentrations in hospitals and funeral homes do not accurately reflect China’s official infection and death figures.

WHO: “COVID-19 outbreak is growing in China”

Some health experts estimate that more than 1 million people will die from COVID-19 in China this year. Airfinity, a health data company headquartered in England, predicts that 36,000 people could die a day in China next week.

“Recently, the pandemic in the country has been at a relatively low level. The number of seriously ill patients in hospitals has been steadily declining, but the burden on the rescue mission is still heavy,” Sun told state-run Xinhua news agency.

China announced last week that the number of people hospitalized due to COVID-19 had reached 63,307, an increase of 70 percent. The number was recorded as the highest hospitalization rate ever announced by China.

The World Health Organization has indicated that the figures in the current report do not include the roughly 60,000 COVID-19 deaths China reported last week.

China said about 60,000 people died in hospitals between December 8 and January 12, but that figure does not include those who died at home. Some doctors say they are discouraged from listing COVID as the cause of death on death certificates.

In early December, China abruptly lifted restrictions on COVID-19 that had been in place for almost three years. The continuation of restrictions in the country has caused violent protests, and the Beijing administration has taken a step back in this regard.

While there are doubts that China is hiding the real data, figures recently released by China indicate that the country is seeing a serious rise in COVID-19 cases.

Concerned that travel will increase cases

With China’s Lunar New Year holiday starting tomorrow, millions of urban Chinese are heading to their hometowns, raising concerns that infections will rise.

The government estimates that more than 2 billion trips were made to China between Jan. 7 and Feb. 15.

On the other hand, the agency in charge of controlling the internet in China said that any “false information” about the spread of the virus that would cast a shadow over the New Lunar New Year celebrations would be censored.

Funeral home spending on items ranging from body bags to cremation ovens has increased in many parts of China, according to documents. This situation reflects the balance of COVID in China.

Growing demand for vaccines in China

Chinese President Xi Jinping said this week that he was concerned about the large number of people traveling abroad to rural areas with a poor health system, saying protecting the elderly, many of whom are unvaccinated, is a priority.

Kate O’Brien, Director of Vaccines at the World Health Organization, in a statement today, praised China for its rapid progress in vaccinating the elderly.

However, O’Brien stated that some older Chinese had previously been advised not to take any action to protect against the epidemic, so they found it difficult to understand the change in vaccination policy.

On the other hand, investors are optimistic that China’s $17 trillion economy will bounce back once restrictions are lifted.

“Markets expect the opening up of the Chinese economy to increase demand,” Nomura said in a statement.

However, experts also warned that declining household wealth and rising youth unemployment due to prolonged lockdowns and travel restrictions in China could hamper the economic recovery.

Chinese tourists, an important part of the global retail and travel industry, are starting to travel again.

From Macau to Bangkok, malls in many far eastern cities are celebrating the Year of the Rabbit with red lanterns and dance performances in an effort to attract Chinese tourists.

Waller made an assessment of the economic outlook at the American think ...