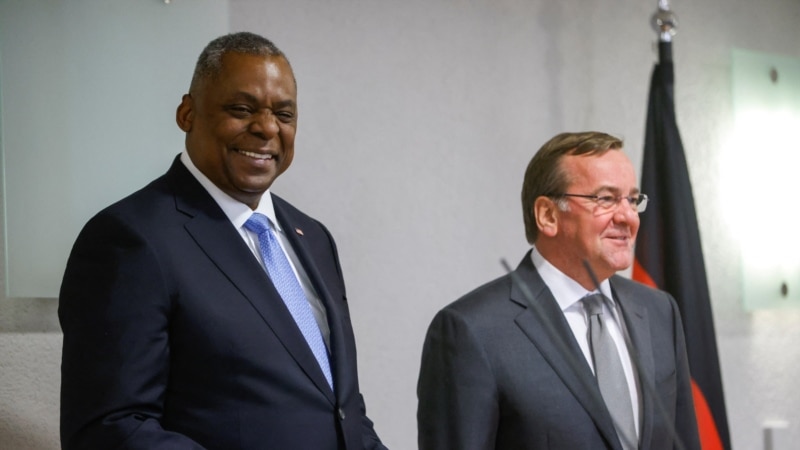 New Defense Minister Boris Pistorius, who took office after receiving a mandate from German President Frank Walter Steinmeier and taking an oath in the Bundestag, met with US Secretary of Defense Lloyd Austin for the first time.

A meeting in Berlin between Austin and Minister Pistorius, who is in Germany to attend a meeting of the NATO Defense and Security Advisory Group for Ukraine tomorrow at the US air base in Ramstein, focused on heavy weapons. aid to Ukraine.

However, there has been no concrete statement from this summit regarding the supply of Leopard tanks to Ukraine, which has been causing controversy for several weeks now. Pistorius, who spoke first at the two politicians’ press conference, stressed that the US is Germany’s most important ally. “Putin’s terrible aggressive war against Ukraine has given NATO a chance to prove that it is a stable and responsive alliance,” Pistorius said, and will support the fight for sovereignty,” he said.

Defense Secretary Austin thanked Germany for its support for Ukraine’s defense and called Berlin’s help “invaluable.” “As NATO Defense Ministers, we will renew our joint commitment to support Ukraine in its long-term defense at Ramstein,” Austin said. Both ministers did not comment on the Leopard tanks.

A look at Germany on a Leopard

It is expected that the issue of sending German Leopard tanks and other battle tanks to Ukraine will be clarified at tomorrow’s meeting of NATO defense ministers, which will also be attended by National Defense Minister Hulusi Akar.

Ukraine’s repeated requests for heavier combat vehicles, such as US-made Abrams or German Leopard tanks, have so far not been met by their Western allies. The Polish and Finnish governments announced that they wanted to send the Leopards they had to Ukraine, and demanded permission from the German government and Prime Minister Scholz.

Polish Prime Minister Mateusz Morawiecki made a statement today saying they were determined to supply the Leopard tanks without waiting for German approval, which would further increase pressure on Berlin. Since the Leopards are produced by the German company Rheinmetall, the supply of tanks to third parties requires coordination. Other states have the right to transfer them to Kyiv only if the Federal Security Council, that is, the Federal Government of Germany, gives permission.

It was learned that Scholz did not make a final decision on the matter, but told US President Joe Biden, with whom he spoke by phone on Tuesday, that Germany would give the green light to the Leopard tank if the US staged an Abrams-type battle. tanks to Ukraine.

However, it is stated that Scholz’s decision in this direction will not mean that Germany will also send Leopard tanks. With the tanks already in production, Rheinmetall announced that they would not be ready for delivery until 2024 due to an overhaul and upgrade of 22 Leopard 2 tanks and 88 ex-Leopard 1 tanks in stock.

The Ukrainian authorities demand that it will not be possible to return the territories occupied by Russia without Leopards, so the German government should immediately approve the dispatch of Leopard-2 main battle tanks. “German guns and tanks are essential for survival. We don’t have much time to discuss this. We expect our allies to understand this and act accordingly. some lands, he said.

On the last day of last year, Scholz announced that Germany would supply Ukraine with 40 Marder 1A3 armored personnel carriers. Later it became known that half of the Marders that will be sent to Ukraine will be provided from those that are in service with the army, but are not actively used, and will be purchased from the arms company Rheinmetall.

Leopard 2 made in Germany.

The Leopard is the main battle tank of the German defense company Rheinmetall. The tank, whose development began in the 1970s, has been used by the Turkish army, as well as the army of England, France and many countries of the European Union since its incorporation into the German army in 1979.

Its 1,500-horsepower tank, with 3,600 built so far, achieves a speed of 70 kilometers per hour and is considered “the best tank in the world” in terms of firepower, protection and mobility. The cost of the Leopard 2 tank is estimated at about $15 million.

The UK government has announced that it has no plans to raise ...

Decree of the President of the Uludag region adopted: environmentalists react!