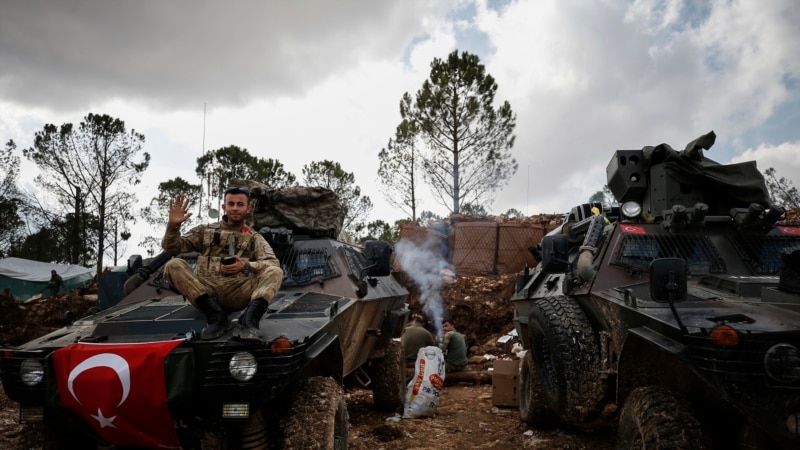 Emin Murad Menan fled the city of Afrin, where he was born, in 2018, when the Turkish army and the Syrian opposition launched an operation in the Kurdish-controlled area in the northwest of the country. Menan received the phone call he had been waiting for.

“The caller was my cousin, who still lives in Afrin, and he told me that my family’s farmland was turned into a settlement for Arabs from other parts of Syria,” Menan told VOA’s Kurdish broadcasting department.

Displaced from his homeland, 59-year-old Menan now lives in Qamishli. Qamishli is a predominantly Kurdish city in northeastern Syria, on the border with Turkey, under the control of US-backed Kurdish forces.

The Afrin area came under YPG control shortly after the start of the Syrian civil war in 2011. However, Turkish forces and the allied Syrian opposition successfully pushed the Kurdish group out of the region during Operation Olive Branch in 2018.

Turkey sees the YPG as a continuation of the PKK. In addition to Turkey, the PKK is included in the list of terrorist organizations of the United States and the European Union.

After Turkey took over Afrin, human rights groups and Kurdish activists accused the Turkish government and its allies of changing the region’s demographics by placing Arab and Turkmen families in the predominantly Kurdish region.

Turkish-backed groups last week announced the opening of a new settlement in Afrin, which will consist of 200 displaced persons, according to Syrian opposition news websites. Menan said that the 10-hectare land on which the village called Eknadein Palestine was built belonged to his family.

Menan told VOA: “This land has been in my family for generations. Syrian government official documents prove that this is our land.”

“When my cousin asked the groups currently running Afrin, ‘why are they building on land that belongs to someone else?’ they replied, ‘We confiscated this land because it belongs to the YPG,'” Menan said .

The village in question was named after the Palestinian humanitarian organization that financed the construction project.

“We are engaged in humanitarian work and are not aware of the complex political issues in Syria,” said Mohammed al-Khalid, project manager for the Gaza-based Ecnadeyn Charity.

Last week, the organization posted photos on its website showing the opening of the first phase of the project in Afrin.

“This land is for all Syrians, no matter who they are or where they come from. It is important for us to alleviate their plight as much as possible,” al-Khalid told Voice of America.

Nazmi Khazouri, the Palestinian consul general in Erbil, the capital of Iraq’s Kurdish regional government, told the Kurdish news network Rudaw on Tuesday that the financing of such projects by the Palestinian group does not reflect the official position of the Palestinian Authority.

“There is no official Palestinian project to build residential complexes in Afrin or anywhere in Syria. Some religious organizations use the name “Palestine” in these projects, Khazuri said.

In September, the Palestinian Authority’s foreign ministry issued a statement condemning the construction of Palestinian-funded settlements in northern Syria.

“We will not allow the violation of the rights and property of Kurdish families in Afrin and other Kurdish areas in northern Syria,” said Riyad al-Maliki, the Minister of Foreign Affairs of the Palestinian Authority at the time.

Legal experts blame the Turkish authorities for allowing such settlement projects to take place in Afrin.

Bassam Alahmad, executive director of Syrians for Truth and Justice, a French-headquartered group that documents human rights violations in Syria, argued that local and international aid groups involved in the construction of these settlements have clear ties to the Turkish government, and therefore get Ankara’s approval.

“As an occupying power, the Turkish government is legally responsible for what is happening in Afrin, including these illegal settlements,” Alahmad told VOA.

VOA contacted the Turkish Ministry of Foreign Affairs about this but received no response.

President Recep Tayyip Erdogan and other Turkish officials have previously said they support the construction of settlements in northern Syria, which will allow some Syrian refugees in Turkey to return to their homes.

Turkey has taken in about 3.5 million Syrian refugees since the conflict in Syria began in 2011, according to the UN.

Metin Chorabathir, head of the Center for Asylum and Migration Studies in Ankara, told VOA that a small number of Syrian refugees have been resettled in northern Syria.

Chorabathir noted that these areas were with a mixed population, that is, before the war, Arabs lived here, as well as Kurds, and some of them have now returned to their homes.

Chorabathir, a former public relations officer and spokesman for the Joint High Commissioner for Refugees, said he did not think there was a general ethnic cleansing in northern Syria due to population restructuring.

“When the Turkish army took control of these areas, some left, but this is not the entire population, and I don’t think it looks like ethnic cleansing,” Metin Chorabatir said.

Displaced from Afrin, Menan said he could not return to his hometown because he feared retaliation from Turkey-backed groups, but that he would not give up his ownership of his lands.

China is approaching the peak of the COVID-19 outbreak. Last Minute ...