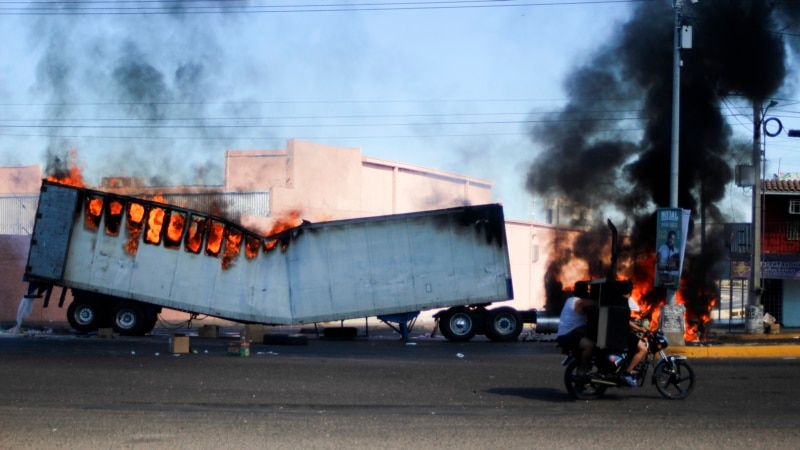 In the events that broke out after the capture of the leader of the drug cartel in Mexico, Ovidio Guzman, a total of 29 people died, including 10 military personnel and 19 members of the organization. Ovidio Guzmán, 32, son of Sinaloa cartel leader nicknamed El Chapo, was detained by police early Thursday morning.

After the capture of the son of El Chapo, who was imprisoned in the United States, members of the Sinaloa cartel set up barricades on the roads and clashed with the security forces. While members of the organization set fire to cars in the streets, they also opened fire on planes at the airport. The airport has also been temporarily closed for use.

After his capture, Guzmán was flown by helicopter to the capital, Mexico City, and then taken to a maximum security prison.

Mexican Defense Minister Luis Cresensio Sandoval, who gave information about the operation at a press conference, said that 21 people were detained during the operation in which Guzmán was captured.

So far, there have been no reports of civilian casualties in clashes between members of the organization and the security forces.

Obrador said that no US unit supported them in the capture of Ovidio, and that the operation was carried out by Mexican security forces. Declaring that the trial would first take place in Mexico and that it was a trial, the President of Mexico stated that the decision on the Ovidio situation would be made by the judiciary.

Mexican Defense Minister Sandoval also noted that an additional 1,000 military unit was sent to the region to ensure security in the city of Sinaloa.

Finally, in 2019, Ovidio was caught during an operation organized to capture Ovidio, who led the cartel after his father. However, during the events started by the gang members, 51 prisoners escaped from the prison, many people died, dozens of houses, workplaces and vehicles were damaged. Ovidio was released after the riots.

Ovidio Guzman was caught shortly before a summit of North American leaders to be held next week in Mexico City, which will be attended by US President Joe Biden. It is expected that among the priority topics of the summit will be the issue of joint security and cooperation.

The US wants to be given Ovidio Guzman too

The US has long wanted Ovidio Guzmán to be captured and handed over to him. The US State Department recently announced that anyone who shares information leading to the capture of Ovidio Guzmán in 2021 will be given a $5 million reward.

Ovidio Guzman, alias “Mouse”, is accused of smuggling cocaine, methamphetamine and marijuana into the United States. The US State Department reported that Guzmán’s Sinaloa lab also produced between 1.5 and 3 tons of narcotic pills per month.

According to information provided by the US State Department, Ovidio Guzmán is also charged with the murder of a famous Mexican singer who refused to perform at his wedding.

The US says that most of the fentanyl drugs sold in the country are manufactured and imported into the country by the Sinaloa cartel.

Ovidio Guzmán’s father, Joaquín Guzmán alias El Chapo, was caught in Mexico in 2001 and 2015 but escaped jail both times. Last detained in January 2016, El Chapo was extradited to the United States.

New US military assistance to Ukraine and its neighbors. Last Minute ...