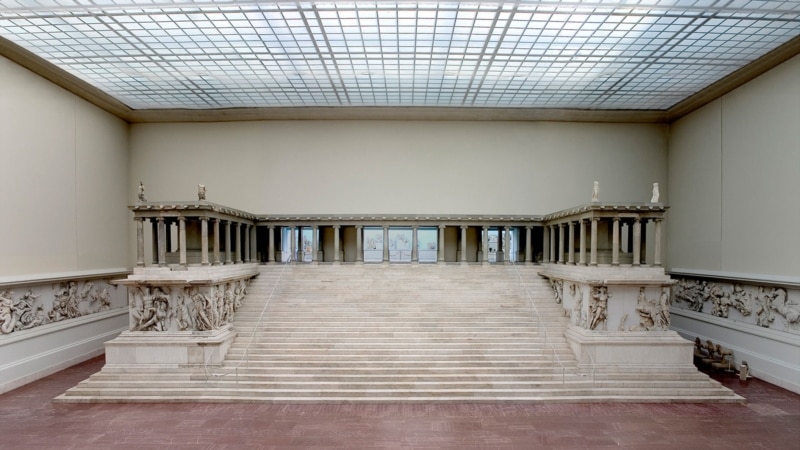 BERLIN. There is heated debate about returning ancient artifacts and cultural property to their original owners, which were confiscated by Western countries during colonial times or as spoils of war, returned to their cities and displayed in their museums.

Catholic spiritual leader Pope Francis ordered the return of three exhibits from the Parthenon temple in the Vatican as a gesture to the Greek Orthodox Church, a decision by the French Parliament in 2020 to return to Senegal precious artifacts looted during the colonial period. and Benin, the latter. On the other hand, the return by the Germans of parts of thousands of artifacts known as “Benin bronzes” smuggled out of the Kingdom of Benin in the 19th century sparked a debate on the issue.

Berlin’s undersecretary of state for diversity and anti-discrimination Saraya Gomis said the Pergamon altar on display in Berlin should be returned, adding an aspect that is closely related to Turkey.

“All cultural products from other parts of the world do not belong to us, they are found here illegally,” Gomis said. He also stated that the museum’s bust of Nefertiti, the wife of Pharaoh Amenophis, should be returned.

Gomis justified these demands by a process of reconciliation with the colonial past of Germany and other Western countries. The Benin bronzes that Gomis mentioned in this context were presented at a ceremony held in Abuja, Nigeria’s capital, on December 21, as part of an agreement signed between Germany and Nigeria on August 25 last year, which provides for the return of more than 1,000 of these valuable works.

Both of these works are among the most popular works of tourists in Berlin and are recognized as the most important exhibits of the museums in which they are exhibited around the world.

The Prussian Cultural Heritage Foundation, which operates the Pergamon Museum, where the Temple of Zeus is located, issued a brief statement regarding Gomis’s request, stating that the work was sold to the German Empire by Ottoman period administrators at the time and this was documented. in an agreement signed in 1878, made a clause for himself.

Waiting for the return of the Temple of Zeus in Turkey

It is expected that the discussion about the Pergamon Altar of Zeus, which since 2014 has been recognized by UNESCO as a World Cultural Heritage site, will gain momentum.

The relocation of the altar to the ancient city of Bergama has long been on the Turkish agenda. The Ministry of Culture, Izmir Metropolitan Municipality and Bargama Municipality have announced that a joint study they launched in 2021 will create a “road map that will accelerate the maturation of diplomatic and cultural conditions for the return of work.”

The mayor of the Izmir Metropolitan Municipality, Tunc Sawyer, announced that “when the deeply rooted heritage of Bergama is explained to the whole world, the demand for the return of the Altar of Zeus can be granted.”

The Ministry of Culture and Tourism also said that Turkey’s historical heritage is under surveillance and that work is underway to return seven historical artifacts from Germany, including the Altar of Zeus.

Prior to this initiative, a campaign was launched on social media called “The Pergamons want an altar to Zeus”.

Lawyers dealing with this issue in Turkey, referring to international norms such as the 1970 UNESCO Convention and the 1995 UNIDROIT Convention, according to which each country recognizes the right to protect its own cultural heritage in its country, state that the possibility of relocating the Temple of Zeus back to Turkey is high.

In 2020, Canakkale Onsekiz Mart University lecturer, Assoc. Dr. Ali Senmez documented that the work was smuggled into Germany in the 1870s by Carl Humann, who was working as a road engineer in Turkey at the time.

History of the Pergamon Altar of Zeus

The Pergamon Altar of Zeus is a monumental religious building built by the Attalos dynasty in the 2nd century BC in ancient Pargamon, known as Pergamon, in northwestern Anatolia, north of Izmir.

Today in Bergama there are only the foundations of an altar dedicated to the Greek gods Zeus and Athena. The horseshoe-shaped structure on display at the museum in Berlin is 12 meters high, and a white marble staircase leads up to the altar table. The outer frescoes tell of the war between the Olympian gods and the giants of the ancient Greek world, while the inner frescoes tell the story of Telephos, the founding myth of Pergamon.

News “Cell phones have caused the death of our soldiers.” News ...