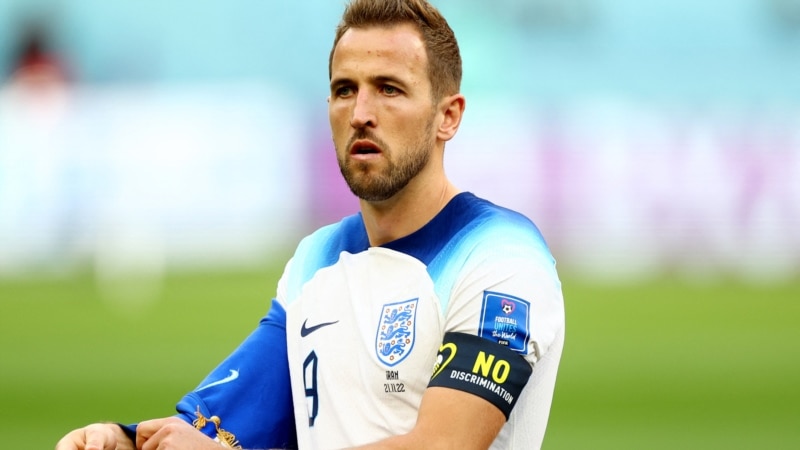 The statement by the International Association of Football Associations (FIFA) that the armbands that were planned to be worn by the teams of European countries during the World Cup matches in Qatar will entail a yellow card.

The football federations of England, Wales, Belgium, the Netherlands, Switzerland, Germany and Denmark have announced in a joint statement that team captains will not wear OneLove armbands at the World Cup under pressure from FIFA.

England captain Harry Kane said on Sunday he would like to wear the armband when he faces Iran in today’s Group B opening game.

In a statement made just hours before the England-Iran match at the World Cup, which kicked off in Doha, “FIFA has made it clear that if our team captains wear armbands while playing on the pitch, they may face sporting sanctions.” .

The statement reads: “As national federations, we cannot put our athletes in a position where they will be subject to sports sanctions. Therefore, we have asked the captains not to wear armbands at the matches of the World Cup.”

Reaction to the decision grew

“It is disappointing that @FIFAWorldCup and @FIFAcom have been silenced and distracted by yellow cards for European team captains for trying to draw attention to human rights issues,” said British fans group 3LionsPride.

The report indicated that the fundamental rights of players, freedom of speech and expression, are being suppressed by FIFA.

“To translate the words of FIFA President Gianni Infantino, LGBTQ+ football fans will be outraged today. Today we feel betrayed. Today we deplore an organization that has shown its true values ​​by giving players a yellow card and a red card for tolerance.” made a statement.

The countries said in a joint statement that they are deeply saddened by FIFA’s decision.

“We consider this decision unprecedented. In September, we wrote to FIFA to let them know that we hope to wear OneLove bracelets to actively promote football, but have not received a response. Our players and coaches are disappointed. supporters of the engagement and show their support in other ways,” the statement said.

Bernd Neuendorf, president of the German Football Federation, said it was unfair that footballers should take responsibility if they decide to wear armbands despite FIFA’s decision.

“We are witnessing an unprecedented situation in the history of the world championships,” Neuendorf said.

The German Football Association is the world’s largest football federation with over seven million active members.

“FIFA failed to uphold its values”

Amnesty International stated that FIFA failed to uphold its values ​​and responsibilities.

Steve Cockburn, Amnesty’s head of economic and social justice, said: “Adjustments should have been agreed long ago on issues like armbands and better protection for the LGBTI community. We celebrate the courage of teams and players who have spoken out for human rights. We hope they continue to do so.”

Wales captain Gareth Bale planned to wear the OneLove armband against the US today, as did Dutch captain Virgil van Dijk. Germany’s Neuer said a few days ago that he would be wearing the ribbon during Wednesday’s match against Japan.

The Dutch Football Federation said: “You don’t want the captain to start the game with a yellow card. Therefore, we, as a member of the UEFA working group, regretfully abandoned our plan. This is absolutely against our sport, which unites millions of people.” We will seriously review our relationship with FIFA together with other countries.”

FIFA President Gianni Infantino delivered a long speech that began with “Today I feel gay” in response to media criticism for allowing a country where homosexuality is still illegal to host the World Cup.

FIFA also rejected the Belgium away jersey due to the word “love” on the collar and the rainbow design.

Emphasizing diversity, equality and inclusiveness, the design was inspired by the famous Belgian music festival Tomorrowland.

Belgium spokesman Stephan Van Look said the team will be playing in red jerseys for the first three games and hopes the issue will be resolved by then if they make it past the first round of the World Cup in Qatar.

If the word “love” is omitted, the team is allowed to play in this jersey.

The new away kit design was released in September and Belgium have played in several UEFA league matches since then.

On the other hand, an American journalist stated that he was briefly detained at the World Cup stadium in Qatar for wearing a rainbow T-shirt in support of the LGBT community.

Former Sports Illustrated reporter Grant Wahl, who now runs his own website, said World Cup security kept him out of the US team’s opening match against Wales at the Ahmed Ben Ali Stadium.

Wahl added that his phone was taken from him when he tweeted about the incident.

“I’m fine, but it was an unnecessary fight,” said Grant Wahl.

Wahl later stated that a security officer apologized to him and allowed him to leave the stadium. Wahl said he also received an apology from a FIFA spokesman.

News “High demand for drugs in Turkey and the EU”. Last ...