Erdogan’s offer to Putin! Will the Syria-Turkey-Russia trilogy be accepted? 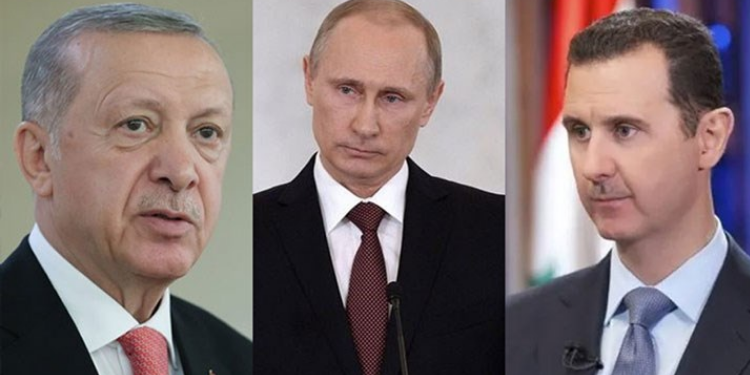 President Recep Tayyip Erdogan said: “We want to take the step of the Syria-Turkey-Russia trio.”

On the return visit of President Erdogan to Turkmenistan, he made comments to journalists on the plane. After Erdogan’s statement, answering questions from the press, he said: “Let’s unite as leaders. I also suggested this to Mr. Putin. He also rated it positively. Thus, we will begin a series of negotiations.”

Responding to a question about a possible ground operation in northern Syria, Erdogan said:

“There are many topics here that may not be on the agenda at the moment, but may come to the fore with developments later. But if you notice, I explained one more thing. This is it; At the moment we want to take a step as a trio Syria-Turkey-Russia. To do this, our intelligence organizations must first meet, then our defense ministers must meet, and then our foreign ministers must meet. Let’s come together as leaders after their talks. I also suggested this to Mr. Putin. He also rated it positively. Thus, we will begin a series of negotiations.”

THE TERROR GIVES ITS POWER FROM THE OIL WELL!

“I DID NOT GET PERMISSION FROM ANYONE”

Regarding claims that the US did not take a very favorable view of the meeting with Bashar al-Assad, Erdogan said: “I don’t talk to whom, when and how I get permission from someone. I had a meeting with the President of Egypt in Qatar. I didn’t get permission from anyone. The decisive factor in the steps we will take regarding Syria will be our national interests. From the safe zone in Syria, this is one of the steps we will take among the measures we will take against a terrorist organization.” said.

The UN removes Iran from the Commission on the Status of Women. ...