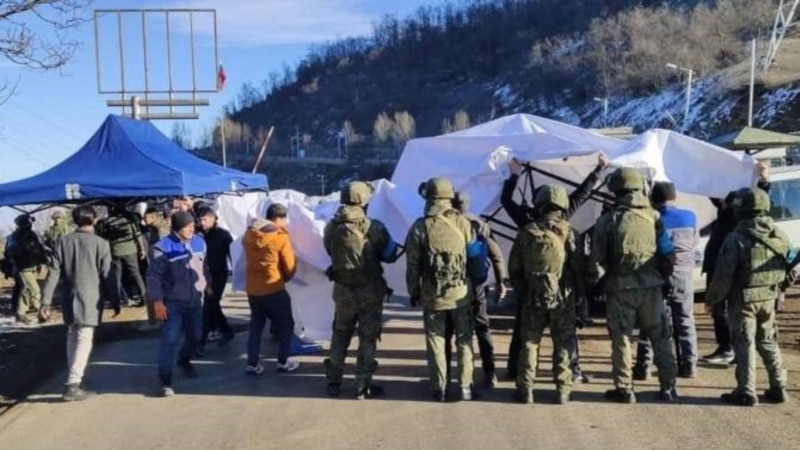 Azerbaijan said the protests, which closed the Lachin Corridor, a supply route for ethnic Armenians in Nagorno-Karabakh, for more than two weeks, would be suspended if observers were allowed access to illegal mining sites.

Since December 12, a large group of Azerbaijanis has been fighting with Russian peacekeepers along the Lachin corridor, which passes through the territory of Azerbaijan and connects Armenia with Nagorno-Karabakh.

Azerbaijani Foreign Minister Jeyhun Bayramov said at a press conference today that Baku has requested access to the monitoring of mining facilities, which, according to him, have been illegally operating in Karabakh for more than a year.

When asked under what conditions the protests could be suspended, Bayramov replied: “The demand of the Azerbaijani side and environmental activists is that the state bodies of Azerbaijan have the opportunity to visit these mine facilities, control and observe the situation.”

Azerbaijani authorities note that the teams of experts they sent to the region on December 10 to investigate the activities of the mines and study their impact on the environment were not allowed to enter.

Ethnic Armenian leaders in Karabakh accuse Azerbaijan of organizing a false protest to blockade the region.

Baku denies this accusation and maintains that the activists are true environmentalists and the protests are justified.

Azerbaijani President Ilham Aliyev also said last week: “The incident on the Lachin road is clear as day. This is our legal right. Our natural resources are used and transported. the rights. Because this place is recognized by the international community as our land. State “We have a legitimate demand that representatives of our institutions conduct inspections there. They must see what is happening and this illegal activity must be stopped. our legitimate demand,” he said.

Azerbaijani protesters: “We are not closing the Lachin corridor”

The organizers of the protests, which have escalated tensions between Azerbaijan and Armenia in recent days, also reject claims that they have closed the Lachin corridor.

Armenian authorities say supplies of food, medicine and fuel to the region have been interrupted due to the closure of the Lachin Corridor, the only highway connecting Nagorno-Karabakh to Armenia in Azerbaijan.

Armenian Prime Minister Nikol Pashinyan argued that the closure of the Lachin corridor meant a violation of the peace agreement reached between Baku and Yerevan in 2020, and that the population of the region was “as if taken hostage.”

Armenia says the protesters were sent to the region by the Azerbaijani government to block Armenia’s access.

Efforts by Russia, the US and the EU to reach a permanent peace agreement between Armenia and Azerbaijan have been slow since the last war in 2020.

Azerbaijan also stated that its soldiers reacted after the Armenian sabotage units tried to mine their positions. As a result of the shelling, more than 200 Armenian soldiers and about 80 Azerbaijanis were killed.

News “I will die when you watch this video.” News headlines ...

In five questions “Why was the attack in Paris not recognized as ...