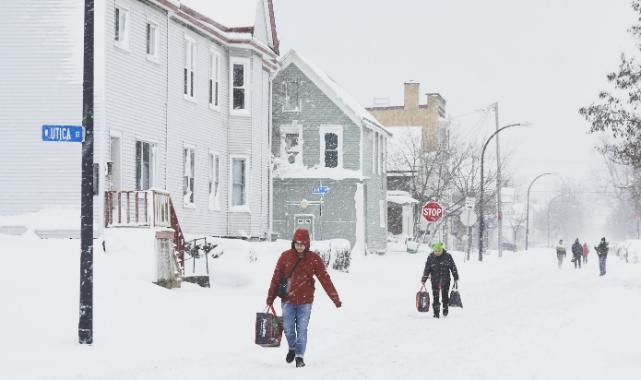 57 people died because of the cold in the US, Canada and Mexico

MEXICO CITY (UAV) – In the United States, Canada and Mexico, a winter storm that hit North America has killed 57 people. The death toll is on the rise due to cold weather and traffic accidents caused by a winter storm hitting North America. After the US and Canada, Mexico also had deaths due to extreme cold. While the temperature dropped to minus 15 degrees in the northern and eastern regions of Mexico and in the Valley of Mexico, it was reported that 3 people had died due to the cold since December 23. In the Valley of Mexico, where the capital of Mexico City and the State of Mexico are located, hail and snowfall have been observed in the highlands since yesterday. It was stated that 1 person living on the street in the city of Naucalpan region died of a cold. The medical teams that arrived at the scene after alerting the residents of the microdistrict stated that the deceased died of hypothermia. The man, popularly known as Chucho, was said to have lived on the streets for many years because he was unemployed and homeless. In the northern state of Tamaulipas, it has been reported that 2 people have died due to the cold weather so far. In the city of Tampico, medical teams who arrived yesterday at the scene after residents of the region reported a man lying motionless on a bench determined that the man was dead. The man, who was declared homeless, is said to have refused to go to the shelter hours before the incident. In the city of Ciudad Victoria, located in the state of Tamaulipas, on December 23, a 60-year-old homeless man died on the way to a shelter.

54 people died in the US and Canada
After a cold wave that has affected North America since last Friday, temperatures dropped to minus 43 degrees in the US and Canada, and at least 50 people in the US and 4 people in Canada have died due to extreme cold and traffic jams. accidents are reported.
It was reported that 25 people died in the Erie area of ​​New York, the hardest hit by the blizzard. Erie Mayor Mark Polonkartz at a press conference described the situation in the district as difficult and said that special teams were sent to help rescuers. New York Governor Kathy Hochul called the winter storm the most destructive storm in Buffalo history at a press conference. Noting that hundreds of National Guard units have been deployed to rescue operations in New York, Hochul said the state police have been involved in more than 500 rescues since yesterday, including the birth of a child.