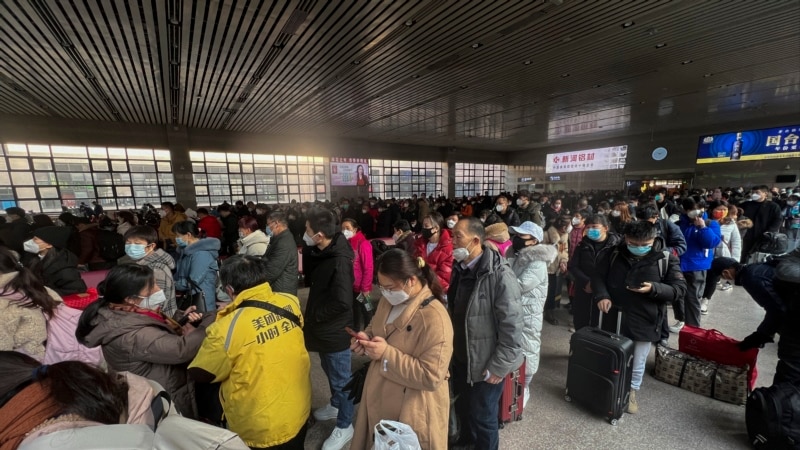 The National Health Commission announced that travelers entering China from Sunday are no longer required to quarantine or be tested for COVID upon arrival.

However, a PCR test done 48 hours before departure to China must be negative.

From January 8, China will resume issuing passports to mainland Chinese residents, as well as regular visas and residence permits for foreigners.

According to a plan released by the Ministry of Transportation, China will gradually resume overland transportation of passengers outside its borders from Sunday, state media said.

The National Health Commission, on the other hand, said that the entry and exit of sea and land passengers will gradually resume, while overseas travel of Chinese citizens will be “regularly” restored.

A gradual restart of all services is planned as pilot programs for international cruise ships are prepared.

From Sunday, all COVID tests for imported food at ports will also be cancelled.

Those entering China from Hong Kong will not be asked to quarantine or take a COVID test upon arrival, according to the statement. For those showing symptoms of COVID, rapid antigen testing may be requested.

Ferry service between the two special administrative regions of Macau and Hong Kong will resume on Sunday. Starting with approximately 10 flights a day, flights will gradually recover.

On the other hand, after China’s abrupt abandonment of the zero-COVID policy a month ago, the country’s health regulatory agency has updated its COVID-19 prevention and control measures to improve clinical classification and treatment methods.

The National Health Commission said positive antigen tests have been added as a diagnostic standard, and the criteria for hospital discharge of patients with COVID have been updated.

On Dec. 7, the commission announced the biggest mitigation steps since the pandemic began three years ago and abandoned a tough “zero COVID” policy after widespread protests against the government.

After the rapid opening of China, more and more countries around the world began to require testing from Chinese passengers.

China’s sudden shift away from its zero-COVID policy is causing a significant portion of the country’s population of 1.4 billion people to be exposed to the virus for the first time. This triggered a new wave of epidemics that filled hospitals and emptied pharmacies.

Greece, Germany and Sweden joined about a dozen countries that yesterday began asking Chinese passengers to take tests. The World Health Organization (WHO) says China is underestimating the scale of the epidemic.

Chinese officials are making statements that underestimate the severity of the epidemic wave and denounce foreign countries’ imposition of testing on their citizens.

Foreign Ministry spokesman Mao Ning said in a statement today that they can take measures based on reciprocity in travel. Finally, the European Union (EU) has introduced a requirement for Chinese passengers to be tested before departure.

“The EU should listen to more reasonable voices and assess China’s fight against the epidemic objectively and fairly,” Mao said at his daily press conference in Beijing.

A nationalist Global Times editorial published by the official newspaper People’s Daily said that whatever steps China takes, Western media and politicians will not be satisfied.

The global aviation industry, which has faced restrictions due to the pandemic for years, has also complained about restrictions on Chinese passengers.

“The opening was hasty”

Some Chinese citizens say the opening was rushed. “They had to take a number of measures before opening. They could at least guarantee the availability of pharmacies,” a Chinese citizen named Zhao told Reuters.

Yesterday, China announced five deaths from COVID-19 in the mainland, bringing the total number of COVID-19 deaths to 5,264, the lowest in the world.

However, in conversation with funeral home and hospital officials, the official statement seems to contradict the facts on the ground. According to the Shanghai Morning Post, at least 200 taxi drivers in Shanghai use ambulances to attend to their emergency needs.

International health officials say Beijing’s narrow definition of COVID-19 deaths failed to capture the country’s actual death toll, and that there could be more than a million deaths this year.

Investors believe opening up the economy could benefit the country’s $17 trillion economy, which is showing the lowest growth rate in 50 years.

These hopes and moves made for China’s housing sector made the yuan appreciate.

China’s CSI300 and the Shanghai Composite rose more than 2 percent in the first trading week of the year.

Hong Kong-based Cathay Pacific Airline said yesterday that it will double the number of flights to mainland China. Flights between Hong Kong and China are a tiny fraction of what they were before the pandemic.

The World Health Organization said that during the Chinese New Year, which begins on January 21, the Chinese will go to visit their families in small villages and towns from around the world, and warned that this trip, which is one of the largest temporary migrations in the world, could cause new wave of epidemics.

The Ministry of Transport urged the public to be careful to minimize the risk of infection for the elderly, pregnant women and young children.

One of the regions that has benefited the most from reopening in China is Southeast Asia, where countries are not asking Chinese visitors to get tested for COVID-19.

Another 11 countries in the region are not imposing further restrictions on Chinese passengers, with the exception of Malaysia and Thailand, which have announced they will test sewage on planes from China to track the virus.