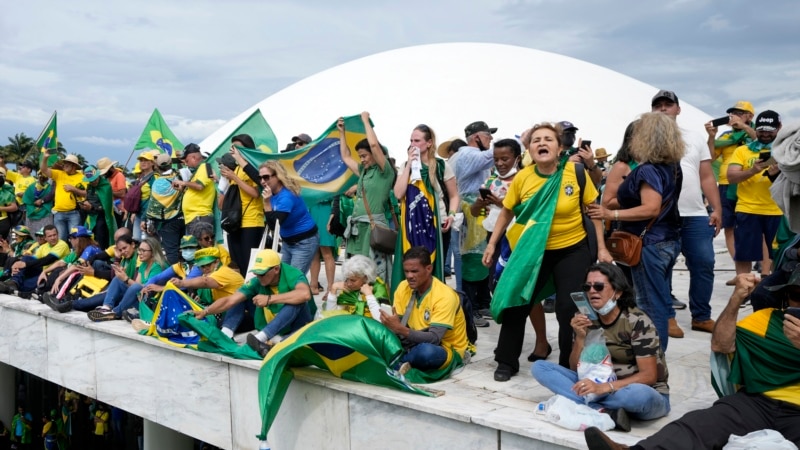 The police have been moved to a camp set up by supporters of far-right ex-president Jair Bolsonaro after the country’s most brutal attacks on public institutions since Brazil’s return to democracy in the 1980s.

Hundreds of armored police have gathered at a campsite near army headquarters in the capital of Brasilia. According to eyewitnesses to Reuters, the soldiers in the area withdrew.

Yesterday, thousands of Bolsonaro’s supporters stormed the Congress, the Constitutional Court and the Presidential Palace.

Left-wing President Luiz Inácio Lula da Silva, who narrowly surpassed his rival Bolsonaro in the October elections and took office on January 1, has vowed that those responsible for the violence will be brought to justice. Protesting supporters of Bolsonaro smashed windows and furniture, destroyed artwork and stole weapons.

US President Joe Biden and other world leaders condemned attacks on Brazilian government offices. Bolsonaro, who lives in Florida, denied provoking his supporters and said the rebels had “crossed a line”.

Facebook’s parent company, Meta, announced today that it will remove content that promotes or praises the looting of Brazilian government buildings over the weekend. Telegram, TikTok, Twitter and YouTube have not yet responded to requests for clarification on the matter.

Lula, who ordered federal intervention to ensure public safety in the capital of Brasilia, promised that the leaders of the fascist attack, which was supposed to provoke a military coup that could bring Bolsonaro to power, would be punished, setting a precedent.

“Anyone who does this will be exposed and punished,” Lula said.

Bolsonaro, who arrived in Florida 48 hours before his term expired, denied the allegations in a statement from there. Bolsonaro tweeted that peaceful protests are democratic, but taking over government buildings means “crossing a line”.

The attack prompted questions from Lula’s allies about why the security forces in the capital were so unprepared and easily overwhelmed by the insurgents. The rebels have been planning to hold weekend demonstrations on social media for several days now.

The attack on state institutions in Brazil was reminiscent of the raid on the US Congress by supporters of former President Donald Trump two years ago.

“Attacks on democratic institutions are attacks on democracy and should not be tolerated,” German Chancellor Olaf Scholz said in a statement on today’s events in Brazil.

Kremlin spokesman Dmitry Peskov noted that Russia “condemned in the strongest possible terms” the actions of those behind the unrest in Brazil.

Police dispersed the crowd with tear gas, and publicly damaging Justice Minister Flavio Dino said 200 demonstrators had been arrested. Brazil’s Governor Rocha, on the other hand, put the number of arrests at 400 in a tweet before he was fired by court order.

Justice Minister Dino said the investigation was aimed at finding out who financed the several hundred buses that brought Bolsonaro supporters to Brasilia and the reason why Governor Rocha did not prepare his security forces.

The takeover of government buildings was planned for at least two weeks by Bolsonaro’s supporters, who organized on social networks such as Telegram and Twitter. However, despite this, the security forces did not take action to prevent the attack.

Some reports that have reached Reuters include claims that some groups have set up rallying points in several cities around the country, and buses will depart from these points to occupy public buildings in Brasilia.

The plans included setting up camp in front of the army headquarters in Brasilia. Bolsonaro’s supporters gathered outside the headquarters after Lula narrowly won the October elections.

Police interfering with social events arrived at the scene two hours after the start of the occupation.

Bolsonaro’s future in the United States is also in question following several investigations before the Brazilian Constitutional Court. Bolsonaro came to the US on a visa that is only granted to current heads of state.

broadcast by Voice of America Brazilian police dismantle Bolsonaro’s camp in the news houra-ber.com editors have no editorial intervention. In Brazil, the news that the police have disbanded the Bolsonaro camp is automatically posted on our website because it comes from the Voice of America website. in this district Brazilian police dismantle Bolsonaro’s camp The legal addressee of the news is the websites and agencies that published the news.

“It’s time for Sweden to take the necessary steps to approve Turkey’s ...