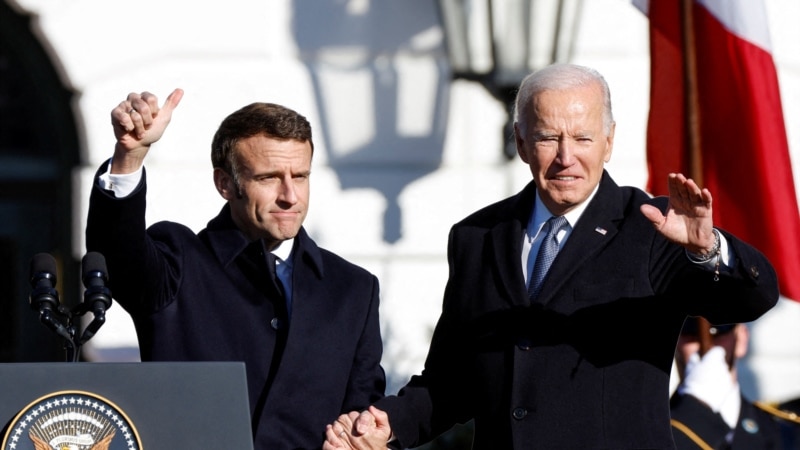 US President Joe Biden received French President Emmanuel Macron at the White House. The agenda of the two leaders was mainly the Ukrainian war. Biden said he would only meet with Russian President Vladimir Putin if he demonstrated his intent to end the war.

US President Joe Biden and French President Emmanuel Macron have previously met as part of international summits; however, this is the first time the two leaders have spent so much time together on a state visit.

The night before, the two leaders dined informally at an Italian restaurant in Washington’s Georgetown neighborhood.

During meetings between US President Joe Biden and French President Emmanuel Macron at the White House, the war in Ukraine was on the agenda.

Ukraine, whose infrastructure projects have been targeted by Russia in recent weeks, is waiting for more help and support from Western countries as it enters the winter season.

At a joint press conference held at the White House after the meeting, the two leaders expressed their determination to continue supporting Ukraine.

French President Macron said that no one will force Ukraine into a world unacceptable to them; He said that the terms and conditions of peace would be determined by Ukraine.

Starting January 3, in the US Congress, Republicans will be in the majority in the House of Representatives for a new term. Republican leader Kevin McCarthy has said they will not give Ukraine “carte blanche” for a $38 billion relief bill that is on the agenda of Congress.

French President Macron was reminded of this Republican view at a press conference and asked about his expectations about whether strong US support for Ukraine would continue.

Emphasizing that the war in Ukraine had a direct impact on Europe, Macron said: “Our values ​​and principles in Ukraine are at stake,” and noted that he was confident that the strong US commitment to Ukraine would continue.

US President Biden was also asked at a press conference if he plans to meet with Russian President Vladimir Putin.

President Biden has no plans to contact Putin anytime soon; He said he would only meet with Putin if he demonstrated his intention to end the war.

Stating that Putin was not interested in a peaceful solution, President Biden said that if the Russian leader demonstrated his intention to end the war, “I am ready to sit down and meet with Putin in consultation with our French friends and our friends in NATO.” to see what’s on his mind. But (Putin) hasn’t done anything like that yet,” he said.

The decision signal for the clean energy law that worries Europe

One of the high-priority items on the agenda of French President Emmanuel Macron’s meeting with US President Biden at the White House was the most comprehensive climate change bill in US history, known as the Inflation Reduction Act.

The law provides certain benefits, including taxation, to US climate change technologies and electric vehicle companies. Europe, on the other hand, argues that the US clean energy law puts its companies at a disadvantage.

French President Macron expressed concern about this during a meeting with President Biden in the Oval Office.

Touching on the issue at a joint press conference between the two leaders, Macron said the Biden administration’s efforts to combat climate change should be applauded; however, he said that the benefits given to US companies under the law would put European companies in a difficult position.

“Not against each other; We want to succeed together,” Macron said that the United States and France are once again synchronizing their clean energy efforts.

Saying that his meetings with President Biden had encouraged him, Macron said he hoped for a fair decision.

President Biden also said in a joint press conference statement on the matter, “I will not apologize for writing the law we talked about”; He said the law was never intended to exclude European allies.

Biden acknowledged that there were some problems with the law and said the US could be tweaked to please its allies.

The US and France also announced a joint working group to resolve trade disputes between the two countries arising from the Clean Energy Act.

The two leaders also discussed China’s recently intensified military presence in the Indo-Pacific region and the growing defense cooperation between Russia and China, especially after the war in Ukraine.

Before the meeting between Biden and Macron, US Secretary of State Anthony Blinken said that expanding China’s cooperation with Russia should be one of NATO’s top priorities.

Macron has previously said that China should not be the focus of NATO.

Meaningful gift to the Biden couple

According to a statement from the Élysée Palace, the Macrons gave Biden’s wife a record and a CD containing the original soundtrack album for French director Claude Lelouch’s 1966 film Un Homme et une Femme (Man and Woman). It is alleged that this is a film that the Bidens watched on their first date.

The Bidens gave the Macrons a mirror in a wooden frame, made by an American furniture maker.

News about the bomb last letter in Spain to the US embassy. ...