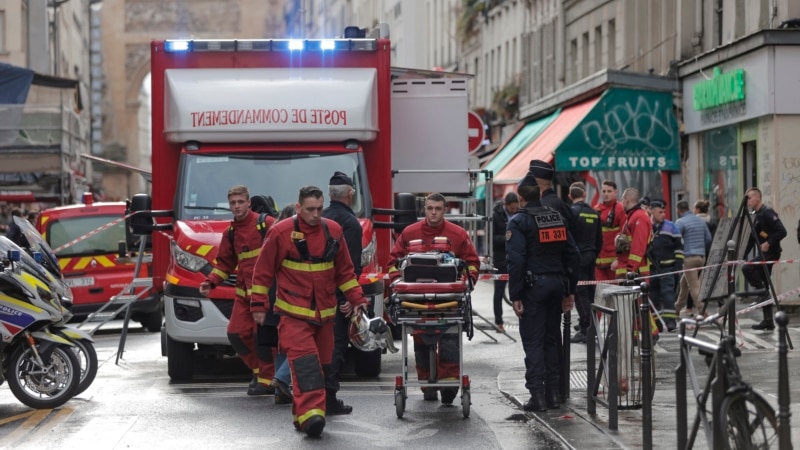 PARIS. The perpetrator of the incident in which 3 people died in Paris, the capital of France, on Friday, December 23, ultra-right aggressor William Malle was imprisoned awaiting trial on charges of “arranging a murder using racist motives.”

Mallet, 69, whose interrogation was temporarily interrupted for health reasons, was arrested yesterday on charges of “murder and attempted murder discriminating on the basis of race, ethnicity, nationality or religion, as well as the acquisition and possession of weapons without a permit.” . his testimony at the interrogation of the judge.

William Malle, a 69-year-old French citizen who attacked the Ahmet Kay Kurdish Cultural Center in the 10th arrondissement in central Paris and workplaces near it, was returned to the prosecutor’s office on Sunday after spending the night in a psychiatric ward based on a doctor’s report during his interrogation .

The suspect, whose legal term of detention had expired, was brought before an investigating judge on Monday and sentenced to pre-trial detention. Mallett was caught after the incident and has not denied his guilt.

William Mallet, who was tried last December for a machete attack on a migrant camp with a large concentration of African immigrants in Bercy near Paris, was released on parole 11 days ago in the Friday attack.

He changed his lifestyle when he “couldn’t see many people”.

According to the information reflected in the statements of the prosecutor, Malle, who went to the suburb of Saint-Denis, where foreigners live, changed his route early on Friday morning, according to his own statement, “because he cannot see many people.” here, and the clothes in which he is dressed will interfere with reloading his gun. returned to the apartment. He took the Colt 45 pistol he kept here and set off again.

The attacker, who arrived in the 10th arrondissement of Paris, where there are a large number of Kurds and Turks, stopped in front of the cultural center of Ahmet Kaya on Enghien street. His plan, again on his own account, was to carry out a massacre by using up all his ammunition, killing many foreigners, and killing himself with the last bullet.

He first opened fire in front of a restaurant on the street, then attacked the Ahmet Kay Cultural Center right next to it, and then entered the barbershop on the opposite side. Visitors and owners of the hall, frightened by the sounds of gunshots, fled to the back hall when they saw the attacker in a red coat and with a pistol in his hand.

The suspect was found to have 4 magazines and a box of 25 rounds of ammunition.

During the attack, 6 people were targeted by the birds of the suspect. The suspect killed Abdurrahman Kizil, a young political refugee singer Mir Perver (Mehmet Shirin Aydin) and Emine Kara, nicknamed “Evin Goyi”, one of the leaders of the Kurdish women’s movement in France, whose asylum application was rejected. Three other people survived the attack with injuries.

Police officers who arrived at the scene found 4 magazines with 14 rounds of ammunition and a box of 25 rounds of ammunition in the suspected former railway worker. Police also determined that the gun he used in the attack was bought by the suspect from a member of a shooting club of which he was a member and did not notify the authorities “due to his previous criminal record.”

In a statement to prosecutors and the investigating judge, the suspect, who attributed his “deep hatred of foreigners” to the 2016 robbery, stated that “having been the victim of the 2016 theft, he always wanted to kill immigrants and foreigners.”

Police analyzed the suspect’s phone calls and computer records to determine if he was associated with any organization or group.

“I’m angry at the Kurds for feeding ISIS”

Paris prosecutor Laura Becco said that after the robbery of her house in 2016, the suspect said that he “experiences a completely pathological hatred of foreigners, is depressed and suicidal, and from the moment of the robbery he wanted to kill immigrants, foreigners.”

The prosecutor also explained that in his statement, the suspect “attacked victims he did not know and said he was angry at the Kurds for feeding ISIS fighters in the camps instead of killing them in the fight against ISIS.”

Ajit Polat, a spokesman for France’s Kurdish Democratic Council, said: “The attack on our associations is of a terrorist and political nature,” while prosecutor Laura Bekko said that during a search carried out at the home of the suspect’s parents, “no links to extremist ideology could be found.” .

The anti-terrorist prosecutor’s office did not conduct an investigation

Therefore, the anti-terrorist prosecutor’s office of Paris (PNAT) has not yet launched an investigation.

In light of the suspect’s detention, his testimony, and the evidence available, the investigating judge opened a judicial investigation into allegations of “murder and attempted murder discriminated against on the basis of race, ethnicity, nationality, or religion, and the acquisition and possession of weapons without a permit.” ruled that William Mallet should be held in custody pending trial.

The “judicial investigation” decision in the French judicial system is a stage reached after the conclusion that the suspect has committed a crime in the light of the concrete evidence available.

However, at a later stage of the investigation, if the suspect’s connection to another group or organization is established, there is a possibility that it will be qualified as a “terrorist attack.”

The news “Hand over the land, or the Russian army will do ...

For the first time in Turkey, the company launched a practice 4 ...