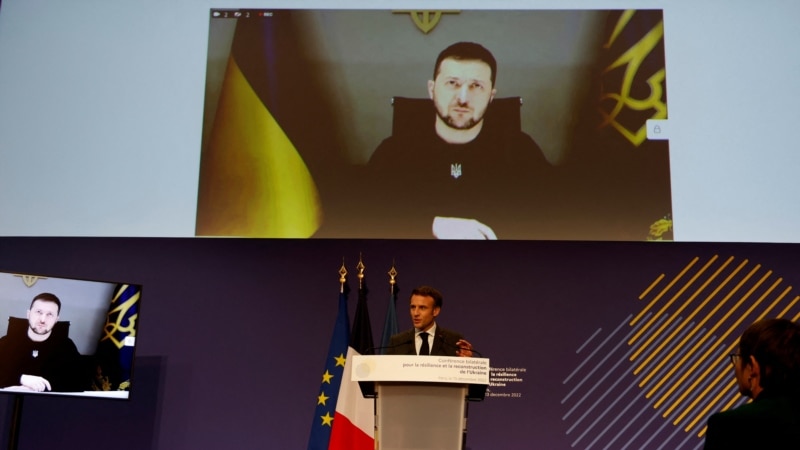 Following an international conference held in Paris, a donation of about 1 billion euros was promised to help the Ukrainian people survive the harsh conditions of war and winter.

The first International Assistance Conference for Ukraine was held under the joint chairmanship of French President Emmanuel Macron and Ukrainian President Volodymyr Zelensky.

A second conference was held between France and Ukraine in support of the post-war reconstruction of Ukraine.

Zelensky, who attended the conference via video link, asked for “urgent 800 million euros” to help participating countries meet their energy and electricity needs. As a result of the conference, the amount of assistance reached 1 billion euros.

The conference was attended by representatives of 46 countries and 24 international organizations such as the UN, EU, IMF and the World Bank, attended by prime ministers, foreign ministers and ambassadors from around the world. The meeting was co-chaired by Ukrainian leader Volodymyr Zelensky, who attended an online meeting with French President Emmanuel Macron.

Ursula von der Leyen, President of the EU Commission that determines European aid to Ukraine, also personally attended the conference. Zelensky was represented in the hall by his wife Olena Zelenskaya and Prime Minister of Ukraine Denis Shimal.

The first person to speak at the meeting, host Emmanuel Macron, said that the Ukrainians “want to help them stand up this winter against Russia, which is acting cowardly and its goal is to bury them in darkness and cold.”

Criticizing Russia with the words “Russia, which has revealed military weaknesses, has chosen a cunning strategy aimed at destroying civilian infrastructure in order to bring Ukraine to its knees,” Macron criticized Moscow, “trying to break through in the back because it cannot hold the front, acting cowardly, to sow terror among the civilian population.”

“These actions, which Russia has openly acknowledged, are not only aimed at undermining the resistance of the Ukrainian people, but are war crimes and will not go unpunished,” the French president said.

Emmanuel Macron, often criticized for his persistence in negotiations between Moscow and Kiev, openly added that “Ukraine itself must determine the conditions for a just and lasting peace.”

Macron called Zelensky’s 10-point peace plan “an excellent foundation upon which we can build peace together.” Russia, on the other hand, announced during the day that the plan could not be accepted.

“We are sending 63 new generators to Ukraine”

Emphasizing that their goal with this conference is “to support the ability of the Ukrainian people to withstand winter conditions,” Macron said that France provided Ukraine with 48.5 million euros, which were identified as emergency winter aid within the conference, and a total of 200 million euros.

“This assistance will also enable the transportation of 63 new large power generators and several transformers, especially in the very short term. This is in addition to the 100 generators delivered in November,” Macron said.

Stating that they have set up a “Paris Mechanism” in countries that will help within and outside the EU to better coordinate international assistance, Macron said that this mechanism will work to meet Ukraine’s needs more effectively and quickly by contacting help points in each country. . . . .

Thanks from Zelensky France

Zelenskiy, who was connected to the conference room from a giant screen after Macron, asked participating countries for 800 million euros for their urgent electricity and fuel needs.

Explaining the situation in Ukraine in detail with numbers, Zelensky said that a decentralized power supply system had been built in Ukraine, explained that “generators have become as important as armored vehicles and bulletproof vests,” and thanked France for helping the generators.

“We will do everything to counter power outages and energy terrorism. Many of our power plants have been damaged by bombings, our engineers are forced to disconnect millions of Ukrainians from the power grid every day. The energy industry needs urgent assistance of at least 800 people. million euros,” Zelensky said.

As a result of the conference in Paris, a donation to Ukraine in the amount of about a billion euros was promised. French Foreign Minister Catherine Colonna has announced that they have provided a €1 billion donation so that the Ukrainian people can winter through. The column said that 415 million of this donation will be used for the energy sector, 25 million for water, 38 million for food, 17 million for healthcare, 22 million for transport and 493 million for needs.

Prime Minister of Ukraine Denys Shimal, who was present at the conference, said: “Extremely powerful support provided to Ukraine by the civilized world. Our country will not be plunged into darkness. We are grateful to all countries that remain our allies in this dark time. “

The EU and Hungary agreed on the news of the funds. ...