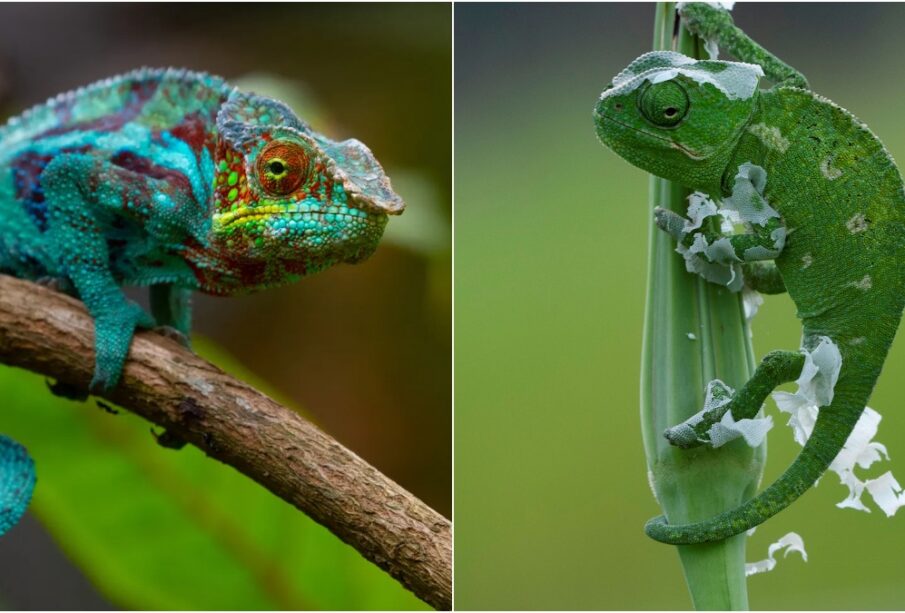 Although chameleons are mostly known for their color change, these animals actually have many other features. They can catch their prey by sticking out their tongue at alarming speed, use their tail as a limb, range from 14 millimeters to 69 centimeters in length, and can even see in two different directions at the same time. In this article we have prepared for you, we have listed interesting information and images about chameleons. If you’re ready, let’s get started!

1. Their legs are different from other reptiles

Most reptiles have 4 or 5 toes that can move independently. The only exception among them are chameleons. The legs of chameleons are made up of two separate fleshy parts. In the first part, 3 fingers are together, and in the back, two fingers are side by side. This is actually a big advantage for chameleons. Since their legs are in this structure, it helps them to better grasp tree branches and keep their body balanced.

2. Almost half of all chameleon species live in Madagascar.

4. They change color not to disguise, but to control body temperature.

Contrary to popular belief, chameleons change color not for camouflage, but to control body temperature. Because light colors reflect the sun’s rays better, they try to cool themselves by illuminating the skin. Dark color is a good way to keep warm in cold weather.

One of the main functions of color change in chameleons is communication. They can send a message to potential partners or competitors by changing the color of their skin. For example, female chameleons show their readiness to mate with bright yellow spots on their skin. When they do not want to mate, blue and yellow dots appear on their skin with an eerie hiss.

5 They Can Change Color Thanks To Tiny Nanocrystals

Until recently, scientists thought that chameleons changed color by manipulating pigments inside skin cells. However, it turned out that this is not the case in a study conducted at the University of Geneva in 2015.

Examining the skin of the chameleon Furcifer Pardalis, scientists found two special layers of cells filled with tiny nanocrystals lying under the skin. Increasing or decreasing the distance between these crystals affects the reflection of light and provides a change in color.

6. Unlike other reptiles, their tails do not regenerate when damaged.

Most chameleon species have a long, prehensile tail that acts as a fifth limb. Their tails help support their body weight and also help them to cling to trees and even catch small prey. However, unlike many reptiles, chameleons cannot regenerate when their tails are damaged.

7. Eyes can turn in two different directions at the same time

Each eye of a chameleon has an incredible range of motion: 90° vertically and 180° horizontally. Also, since they can move their eyes in opposite directions, one eye can look up and to the right while the other eyes can move to the lower left corner. This allows the chameleon to scan almost the entire environment without moving its head.

After the chameleons catch their eye, they activate their fast-acting weapons, namely tongues. Their tongues, which can be about 2.5 times the length of their bodies and can open and rewind in less than a second, are very sticky.

Biologist Christopher Anderson recorded the moment when 55 different chameleons representing 20 species were hunting. After studying the images, Anderson concluded that the speed and quality of chameleon tongues is inversely proportional to their size. In other words, smaller chameleon species use their language much faster and more powerfully than larger species.

9 Their saliva is incredibly sticky.

You may have seen in documentaries you watched that chameleons feed on insects that they hold with their tongues. So how do these animals hold on to the tongue of a chameleon? The answer is simple: thanks to their saliva, which is about 400 times more sticky than human saliva. Chameleons can easily catch prey heavier than themselves, as their super-sticky saliva coats their entire tongue.

10. They have an interesting walking style.

We have come to the end of our list of interesting chameleon facts. These creatures walk in a very interesting way. Because while walking, many species move back and forth in an uneven manner. Some scientists explain why they walk like that by imitating the swaying of tree branches. They think they do it to better disguise themselves. However, there are no studies to support this hypothesis.

Iran detains one more opponent according to the agent. Last Minute ...